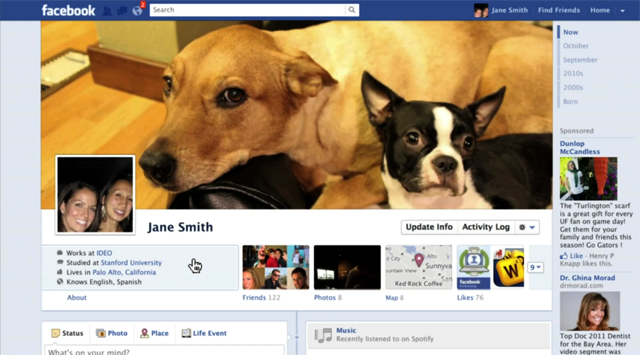 Identity is important to everyone, but many startups get it wrong. Getting identity right has been one of the main keys to Facebook’s success.

As Facebook gets ready for its monster IPO, which will likely value the company at more than $100 billion, I thought it would be valuable to take a look at some of the critical product decisions that lead to its success.

In this first part of a four-part series on how Facebook made small design decisions that had a tremendous impact, I’ll focus on identity (see links to the rest of the series below).

There was a time when Facebook and Twitter were neck-and-neck for which was going to be the dominant social network. In many ways, Twitter got it wrong.

Back in my CompuServe days, my online identity was 72457,0056. Handles aren’t that bad, but they’re not much better, either.

Real people refer to each other by names, not handles. Real people can’t remember arbitrary strings. Facebook made the right call by focusing on the names people use for each other instead of handles. (This shouldn’t we confused with the discussion of real names vs. pseudonyms.)

Although nerds, SEOs, and marketers care about getting a single letter username or being “rocky,” this isn’t a concern for a lot of regular people. A name is the most personal thing to someone, but many startups force people to give that up.

Computers need unique identifiers, but people don’t. Most people don’t have namespace collisions within their friend circles. To the extent that they do, they’re easily resolvable by context. (For example, I know two Mike McCarthys from two different companies.) Facebook has a unique identifier to address the needs of its computers, but I don’t know what mine is or the IDs that Facebook computers associate with my friends. I don’t have to.

One of my product-design mantras is “Don’t make people think like computers.” The most successful apps we use address this for us. With type-down on Gmail, I never actually have to remember someone’s email address. (My personal address on Gmail was designed deliberately such that it isn’t memorable, to prevent dictionary spam attacks.) With cell phone address books, we don’t have to remember people’s phone numbers.

Part of the reason Twitter never took off as a communications medium among the masses (versus a publishing medium) is that they’ve made it too damn hard to communicate with anyone. Twitter only searches against the handle when you start addressing someone. And the search algorithm doesn’t even make sense. 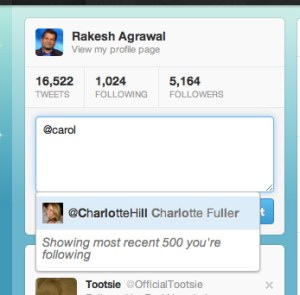 Look at this search for Carol:

For some reason, Carol matches against CharlotteHill. (All the letters are in there, but in a different order.) But if I try to enter @fuller, I get no results because Fuller isn’t in Charlotte’s handle, even though it’s part of her name.

Another problem is that Twitter only searches against the 500 most recently followed people. The other day, I wanted to meet my friend Jill Okawa Fletcher for a drink. But because I followed Jill a long time ago, she doesn’t come up when I do a search. (My friend Carol Glover doesn’t show up in the Carol search for the same reason.) This is really silly in 2012. Computing power and storage is cheap enough that you could search against the whole follower list. Google searches much larger datasets for its search suggestions.

This limitation makes it hard to communicate. And when you make something hard, people will do less of it. In many cases, they’ll say forget about it. In other cases, they’ll go to the trouble of searching Google to find the right handles, but get annoyed by it. I often Google “Twitter [real name]” to find the Twitter handle of someone I’m following. I shouldn’t have to use another product to accomplish core functions of your product.

Handles create another problem: they make it harder to onboard people. For very popular services, trying handle after handle only to find them taken creates a barrier to sign up. (My Twitter handle of rakeshlobster comes with its own back-story.) This reduces ROI on marketing dollars.

Google’s success can also be attributed to the need for people to relate with computers on people terms, not computer terms. The domain name system is unfriendly to humans. There can only be one Nissan.com, but that isn’t the car company. Google translated people’s desire to quickly find the car company, http://www.nissanusa.com/  (if you’re in the U.S.), into a $200 billion business.

You can check out part 2 and 3 in this series now: