The new funding — from a financial technologies company that declined to be named — will be used to extend the business beyond its current focus on banks, president/CEO and co-founder Rob Heiser told VentureBeat. Segmint is offered as a white-label platform through resellers to their customers, all of which are banks.

“First and foremost,” he said, the company will pursue the insurance vertical, followed by retailers, with an approach similar to what it has been using for banks.

After a bank has identified its business goals, the platform “ingests all data, typically first-party,” Heiser said, which refers to information that the enterprise collects directly from customers. This could include data from checking account transactions, credit cards, or loan payments.

A person’s data is assigned a token, so the person can be targeted by Segmint but not ID’d. The platform then determines the KLIs, or Key Lifestyle Indicators, associated with that token/person. The KLIs could determine if a person is, for instance, a candidate for a new car loan, a homeowner possibly ready to refinance, or a shopper at natural foods stores.

“Every single customer in a bank becomes a customer of one,” Heiser told us, “with many different KLIs associated [just] with that individual.” 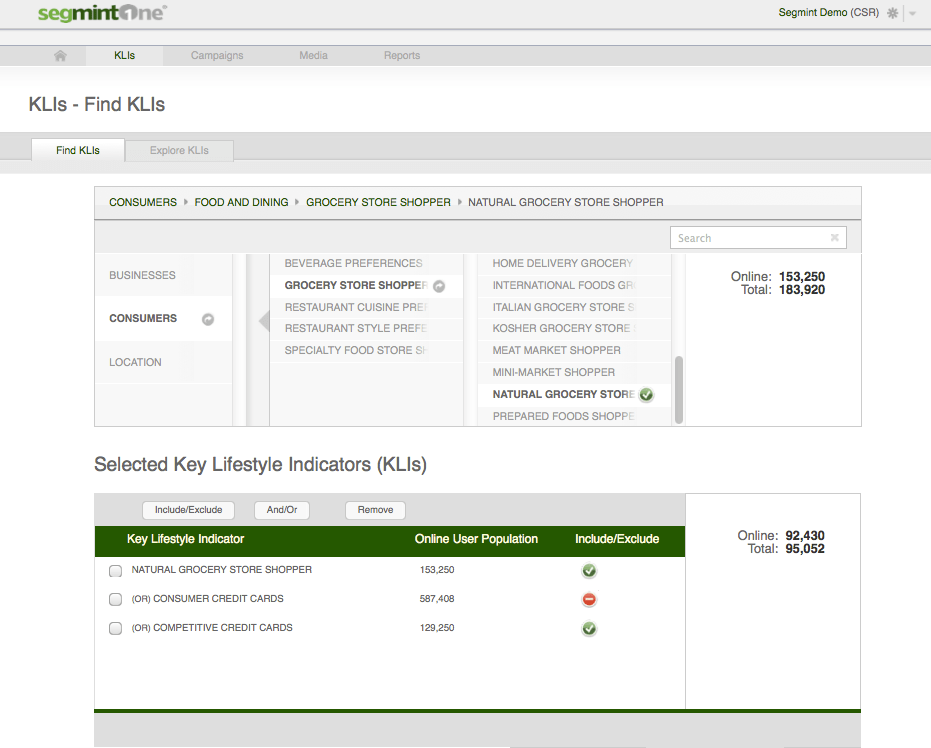 Above: A screen showing the Key Lifestyle Indicators of a user.

A Segmint user can then use the platform to create a campaign of messages to that token-identified, logged-in user, through messages on the website or via ads generated on the platform and delivered through an interface with a real-time bidding system. The information can also be used for offline marketing.

While there are data aggregators like Acxiom, along with competitors that can similarly analyze an enterprise’s data, segment customers, and target them with marketing messages, Heiser pointed to several of Segmint’s differentiators.

They include, he said, its compliance with bank regulations — including a strict adherence to privacy — as well as its ability to provide an end-to-end solution from raw data to delivery of messaging or ads.

And the company says it can quantify return-on-investment by listing the value of any financial products attributable to the targeted messaging.