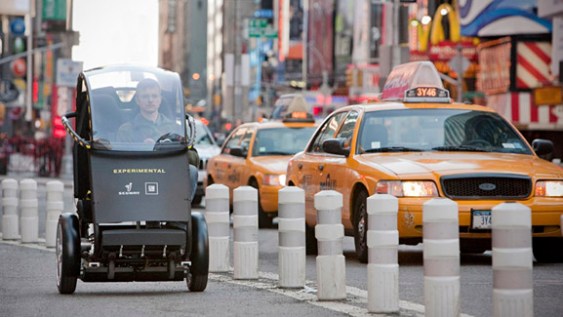 And you thought the original Segway was funny looking. Now the company that brought you the standing transport for people who don’t feel like walking has joined forces with General Motors to produce a two-wheeled, two-passenger vehicle for “urban” transportation — unveiled for the first time today. Powered entirely by electricity and dubbed the Puma, it looks sort of like the back end of a bicycle taxi without the bike.

Unlike its Segway cousin, which tops out at 12.5 miles per hour, the Puma can reach speeds of 35 miles per hour. Coincidentally, 35 miles is the distance the vehicle can go before it needs to be recharged, making it more ideal for short-distance travel (think the not-too-sprawling Mountain View, Calif. GooglePlex — where I’m sure they’re already on order). Whether or not the Puma will catch on enough to reduce congestion and emission pollution in major cities (the companies’ lofty goal) will remain to be seen, though Smart Cars are making the leap from Europe in greater numbers these days, so you never know.

Another unique Puma feature is connectivity between the cars. Their built-in technology not only detects moving objects up ahead to better avoid them, but wirelessly shares this information with other Pumas. GM and Segway say these capabilities could help smooth traffic, locate parking and bring drivers together in a vehicle-based social network. But this, too, depends on how well the car is embraced by the general public. With its compact shape and out-of-place looks, it might be hard to convince everyday drivers in places like New York City to brave the streets — or San Francisco’s hills for that matter.

While its release date hasn’t been disclosed, the Puma will probable cost about $5,000, or a third of what a regular car costs. This sounds like a good enough deal to draw customers. But considering its distance and speed constraints, most people will need to purchase it in addition to a full-time car, making it a more discretionary purchase in a down economy.

Don’t get me wrong, the vehicle is an impressive feat — using souped-up lithium-ion batteries, dynamic stabilization for two-wheel balance, electronic acceleration, vehicle-to-vehicle communication, and even autonomous driving and parking functions. It certainly seems more practical than the Segway, and no doubt foreshadows more exciting zero-emission vehicles to come. But as is, it might be a tough sell.