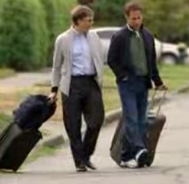 No, seriously, what is the deal with those Jerry Seinfeld/Bill Gates Microsoft ads? In what I can only think is an attempt to upstage the lackluster finale of the show Seinfeld, the ads are apparently over, Valleywag reports. But why?

Microsoft is saying that the move away from Seinfeld was always planned, as it moves into “phase two” of its $300 million marketing campaign. But Valleywag doesn’t seem so sure that the Microsoft statement isn’t just PR spin.

I’m not entirely convinced this isn’t some stunt just to drum up more false publicity — taking Seinfeld away for a few ads before he makes a triumphant return — but if this really is the end, I’m going to have to call Microsoft’s ads a failure. Did they get people talking about Microsoft? Sure, some people in the blogosphere who either made fun of or flat out didn’t get the ads. But they did absolutely nothing to propel Microsoft’s brand forward.

Regardless of whether this move was planned or not, the fact that nearly everyone’s immediate reaction is that Microsoft is canceling the ads because of their failure to connect with viewers, is not a good thing — at all.

The second ad was better than the first, so I was of the mindset that they were slowly setting up Seinfeld’s and Gates’ odd couple personas for a larger campaign. But if you take Seinfeld out of the equation now, it’s all set up with no pay off. That’s an entertainment no-no.

If Seinfeld is walking away with $10 million for two lackluster ads, he’ll have succeeded in making at least one person laugh: Himself — all the way to the bank.