Semantinet, a company that hopes to give users more information about topics on web pages without them having to perform a search or leave the site they’re on, is launching a product called Headup into private beta this morning at the Web 3.0 conference in Santa Clara, Calif.

The idea is to give on-the-spot access to reams of information that today’s web sites can’t or won’t add for themselves. So if you see a reference to a movie on a blog, for instance, a tiny Headup icon will appear beside it. When you click the icon, a pop-up box will appear that might show, for example, clips from the film on YouTube, a review posted on another blog, or a comment a buddy left about it on Friendfeed.

People who have been following similar startups will see an immediate comparison to another company, called AdaptiveBlue, because Headup also requires the download of a plugin for Firefox. That gives it the ability to directly modify web pages that you’re viewing in the browser (a few other companies, like Zemanta, also use this approach).

Startups like Semantinet are in effect trying to take a shortcut to the next generation of the Internet, by forcing additional content into web pages — what’s often called a “top-down” approach to the semantic web, rather than the bottom-up approach of web site owners structuring their own content so that machines can easily read it and link it to other sites.

The problem that top-down startups avoid is the painstakingly slow development of the semantic web; most data is still just plain text that can’t easily be accessed by other websites. However, a top-down approach has its own dangers. The biggest is that users are forced to download a plugin, which immediately excludes the majority of users.

Those users who are motivated enough to download Headup will require a careful balance between being deluged with useless information and having a plugin that doesn’t do enough. AdaptiveBlue’s BlueOrganizer, for example, is good at giving information about things like books and music. But for a web surfer who only occasionally reads about those things, it may not seem worth keeping installed.

Headup is taking aim at similar subjects, although CEO Tal Keinan says that others, like people and blog posts, are also part of the package; on a blog, for example, Headup might be able to give you a preview of a story before you click on the headline, or it might show information from Wikipedia when you ask it to expand on Warren Buffet’s name. But the real target audience for the moment are tech-obsessed geeks, with a number of friends online.

That’s why Headup has already been optimized for sites like Friendfeed and given the ability to aggregate information about friends from networks like Facebook, MySpace and Twitter. Click beside a friend’s name on any of those, and Headup will show you what they’ve done on the other sites. Of course, Friendfeed itself tries to do something similar, so the question becomes, which interface nets in all that information more attractively. 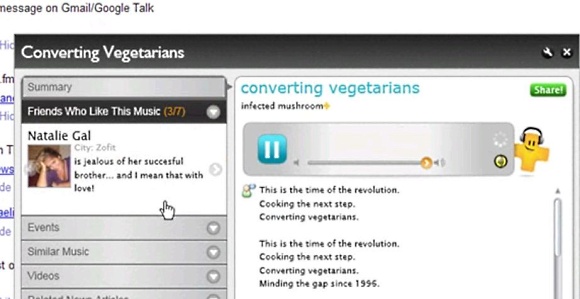 Over time Semantinet aims to become attractive to people beyond the early adopter crowd, by working progressively to bring in ever more subject areas. One example could be company names; Headup could easily feed in more information about startups on a blog like VentureBeat, or stocks on CNN. But each of those category types has to be optimized to be truly useful, so expansion will take time.

This is the first time that Semantinet has talked openly about what it’s building. A month ago, the Israeli company also announced a $3.4 million second round of funding. Its first round of $1.7 million closed early this year.