Sempra Energy, the major utility and energy services company in Southern California, announced today that it has contracted First Solar to build a 48-megawatt array of solar panels in the Nevada desert, dubbed Copper Mountain. The facility is expected to start producing electricity within the year, reports the Wall Street Journal.

This is not the first time Sempra has worked with First Solar. It also tapped the Tempe, Ariz. company to construct its 10 megawatt solar farm called El Dorado (pictured below), located outside Boulder, Nev. near its new site. The project’s short time frame is no doubt being helped along by the companies’ familiarity with one another, as well as the fact that publicly traded Sempra will self-fund the facility without relying on outside partners or investors. The company says it will also benefit from a 30 percent tax credit to reduce costs. 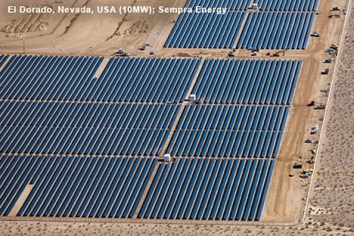 Pacific Gas & Electric is the official distributor of energy produced by the El Dorado solar plant, but Sempra has yet to strike a deal for the energy generated by Copper Mountain. It claims that this new thin-film array will be capable of powering 30,000 homes. But if it can’t land a contract with a utility, the project might stall or dead end, and the deal with First Solar is contingent on this happening in the near future. Sempra shouldn’t be too worried, however, as new state regulations have lit a fire under southwestern utilities to make deals with renewable energy providers. For example, in California, utilities are now bound by the government to produce one-fifth of their energy output from renewable sources by next year.

The Copper Mountain project is part of San Diego-based Sempra’s much larger plan to build 500 megawatts of solar power plants in the next several years. It already has designs for a 300 megawatt facility outside of Phoenix, Ariz. But it’s not relegating its efforts to solar power. It also has a wind farm near Baja California, Mexico in the works. While the company has said that producing energy in such high volumes will reduce its cost per kilowatt hour, some analysts remain skeptical, projecting that the electricity the new facility produces will cost twice the 7.5 cents per kilowatt hour Sempra has estimated.

Regardless, the deal continues First Solar’s run of good luck during a time that hasn’t been so kind to the solar sector. Many of its competitors, Ausra and OptiSolar among them, have had to scrap plans for large-scale facilities in favor of panel and equipment sales due to the drought in capital. But First Solar, undoubtedly the dominant force in its field, still has ample resources. In fact, it just bought a batch of solar projects from OptiSolar for $400 million in stock. Its buy included a $1 billion, 550-megawatt solar facility in California (along with a contract with Pacific Gas & Electric) and 19-gigawatts-worth of fields throughout the southwest.