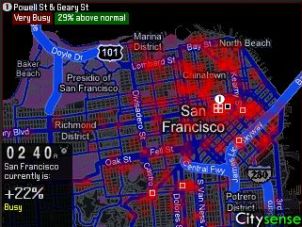 In what may be a first step toward bringing some real-time intelligence to local recommendation sites like Yelp and CitySearch, a startup called Sense Networks is today unveiling a new platform, called Citysense, that it says can create a Google-style “index” of places in a city based on where people are going.

Think of people as being a bit like members of nomadic tribes, and you’ll be on the track to understanding what Sense wants to do. By tracking where users go by their cellphone signal, the company plans to map out the hot-spots of different social groups within cities, both collecting historical data and updating on a moment-to-moment basis.

If it’s Saturday night, for example, a jazz-lover in his 30s might check his Blackberry for a recommendation on where to go from Sense, and he’ll get a listing for the jazz club where people in his age-group are headed to that particular evening, instead of simply the club users have found best overall.

CEO Greg Skibiski calls the platform an “experiment” for his company, whose main offering is a product called Macrosense that offers data to companies, mainly retail stores, that want to know where to place their business. To date, Sense has built up most of its information from data it buys from taxi companies, which track the movement of their cabs around cities via GPS. Sense will also apply the cab information to CitySense, using internal machine learning software to start its initial index of San Francisco.

Skibiski is interested in what other companies might want to do with the information from Citysense. The possibilities seem abundant. Sites like Yelp have enjoyed robust growth, but generally fall short in being able to tell you what to do right now. On the flip side, sites like Going and Eventful have information on planned events, but can neither tell you about how busy one street is compared to another on a given evening, nor whether that hyped-up DJ night at the local club is actually attracting people or not.

Any of the above sites could use a platform like Citysense to provide mobile alerts and up-to-the-minute information to users, or a new contender could show up with a clever interface — club owners could testify that a simple application just showing where all the women in a city are going would be an instant hit. Skibiski, for his part, is confident that the data Citysense will generate is good, saying that its true strength is its machine learning, which factors in historical data, allowing it o function well even with few users in the system.

Another take on the concept is Where.com’s Buddy Beacon, which lets you keep tabs on where your friends are. However, Citysense seems fairly original, since it shows similar people rather than just friends, thus potentially adding much more data and helping out users in unfamiliar towns.

For its early users, Citysense will be available for download onto Blackberry phones, with a release planned soon for the iPhone.

Sense Networks is based in New York City. The company recently closed a first funding; Skibiski wouldn’t disclose the amount, but VentureWire reports that it was $3 million, from Passport Capital and unnamed hedge funds. The company was founded in 2003.