Fortnite isn’t just winning over celebrity fans; it’s also making money. As I reported earlier today, Fortnite is the No. 2 highest-grossing game on iOS, and app store intelligence firm Sensor Tower estimates it has made $1.5 million worldwide on Apple’s devices since turning on in-app purchases.

Sensor Tower mobile insights boss Randy Nelson notes that more than $1 million of that total came in the first three days that the app was available on iOS. Fortnite is in an invite-only period on mobile, so people cannot just download it and start playing. Those revenue numbers could see significant growth once Epic opens up Fortnite to everyone on iOS and then Android.

“This places the game well ahead of its primary rivals in the burgeoning mobile survival game genre during the same post-launch period,” Nelson wrote in a blog post. “Fortnite has out-grossed NetEase’s Knives Out and Rules of Survival by a factor of more than 25 in its first four days of IAP availability, compared to the same period after both those titles began monetizing.” 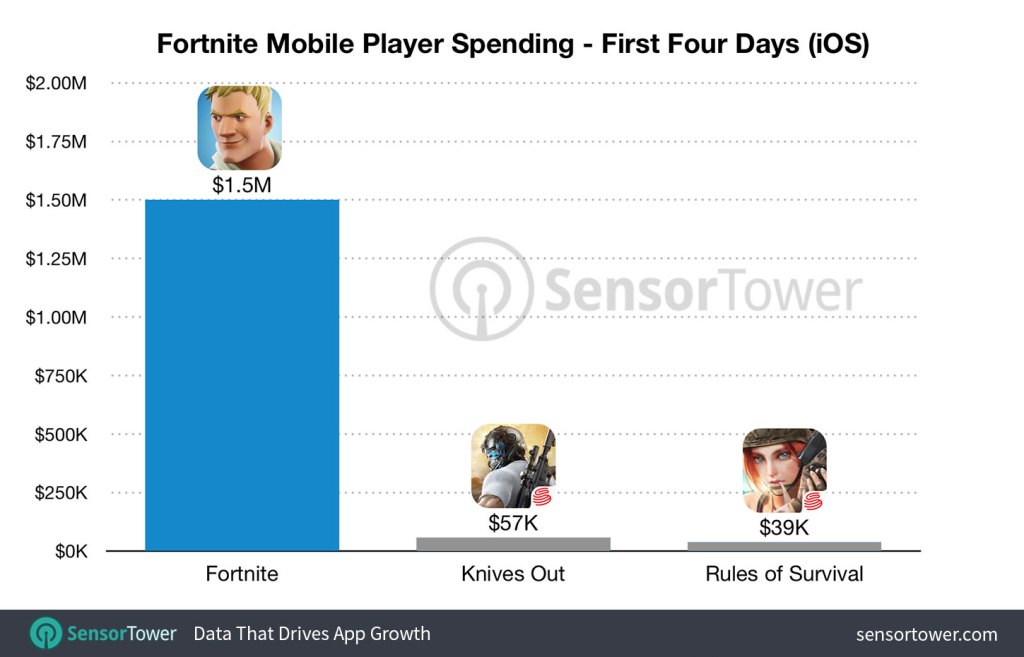 Fortnite’s biggest battle royale competitor, PlayerUnknown’s Battlegrounds, just went live on iOS and Android earlier on March 19. But even that game hasn’t hit the top 10 for downloads in markets like Canada, where it launched early.

But comparisons to other last-player-standing shooters doesn’t put Fortnite into perspective. Instead, it’s better to look at how it is doing in context of other huge mobile releases from the last 2 years.

“It has managed to gross about one third as much as both Pokémon Go, $4.9 million, and Clash Royale, $4.6 million, made in their first four days of availability on iOS,” reads Nelson’s blog.

Both of those games have microtransactions for items that improve your performance, but Fortnite does not. That is impressive and shows just how passionate players are about Fortnite right now.