It was another Merry Christmas for Mixi, as Monster Strike once again led the revenue estimates from December according to Sensor Tower, a mobile market research firm. Supercell also partook in this holiday cheer, with its latest game, Brawl Stars, leading the download estimates.

And Fortnite just keeps chugging along.

Mobile gaming should’ve raked in more than $70 billion in 2018, according to an estimate from Newzoo, another market research firm. Findings like Sensor Tower’s help publishers and developers decide what they should make, which platform they should choose, and what regions are best for their games. 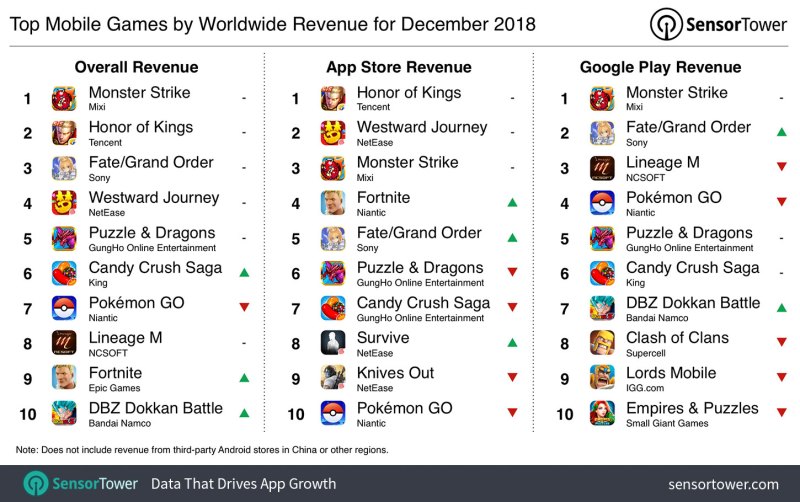 Mixi’s Monster Strike beat out Honor of Kings and Fate/Grand Order for the second month in a row. Monster Strike has been a mobile bruiser in its home country of Japan since its 2013 debut, even if the studio shut it down in other territories, such as the U.S.

“This was the second month in a row that Monster Strike, Honor of Kings, and Fate/Grand Order ranked first, second, and third, respectively. The last time Monster Strike ranked No. 1 prior to November was in January 2018,” said Randy Nelson, the head of mobile insights at Sensor Tower.

Honor of Kings goes by Arena of Valor in the West, and it’s one of Tencent’s biggest money makers. It’s a mobile strategy game (like League of Legends, it’s a MOBA — multiplayer online battle arena), and it has a thriving esports scene to go along with its massive player and revenue numbers.

One of the big differences between December’s and November’s charts is Knives Out, the battle royale which hit the top 10 in revenue for the first time in November since its 2017 release. It’s out of the top 10 this month. Pulling into that bottom spot is Dragon Ball Z: Dokkan Battle, which has bobbed-and-weaved through the top 20.

“Knives Out was pushed out of the overall revenue top 10 for December to No. 13, in part due to significant month-over-month growth in spending for both Fortnite and Dragon Ball Z Dokkan Battle, which both grew more than 80 percent over November. Knives Out also saw its revenue decline M/M from November by about 8 percent,” Nelson said. “Dokkan Battle has moved into and out of the overall revenue top 10 consistently over the past three years.”

And Epic’s battle royale juggernaut, Fortnite, had its best month for player spending yet, grossing more than $68 million globally on the Apple App Store.

“Fortnite’s big December was the result of two main factors: the debut of Season 7 early in the month, then a massive almost [threefold] increase in spending on Christmas that led a week of higher-than-normal daily revenue for the game through New Year’s,” Nelson said. 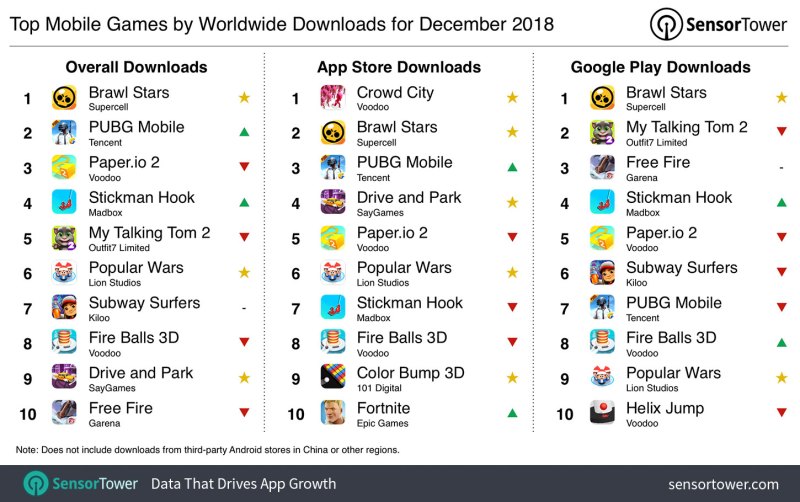 Supercell’s Brawl Stars had a strong debut month, coming in on top of the Google Play Store for downloads and No. 2 on Apple’s App Store. This is encouraging news for the Clash of Clans/Clash Royale studio, showing that the new game is off to a strong start. It took in more than $10 million in its first week and more than $63 million for the month.

The other standout from the download chart is Popular Wars from Lion Studios, the mobile game publishing arm of AppLovin, the discovery platform. It’s a casual game about high school popularity.