Monster Strike might have been an international miss, but folks in Japan continue playing — and spending — enough that it made more revenue than any other mobile game in the world. That’s according to Sensor Tower, at least.

The market research firm released its findings for the games with the most revenue and downloads for November, showing what’s strong and trending in the mobile gaming market, which is worth more than $70 million in 2018. That’s according to Newzoo, another firm that gathers intelligence on gaming markets.

These charts, like The NPD Group monthly sales report for console and PC games, doesn’t track every store. Sensor Tower can’t pull data on third-party Android sellers in China. But like the NPD report, it paints a good picture of what’s making money, what people are downloading, and other trends at the top of the market.

Let’s look at the charts, starting with the top 10 games by revenue.

Monster Strike is the king 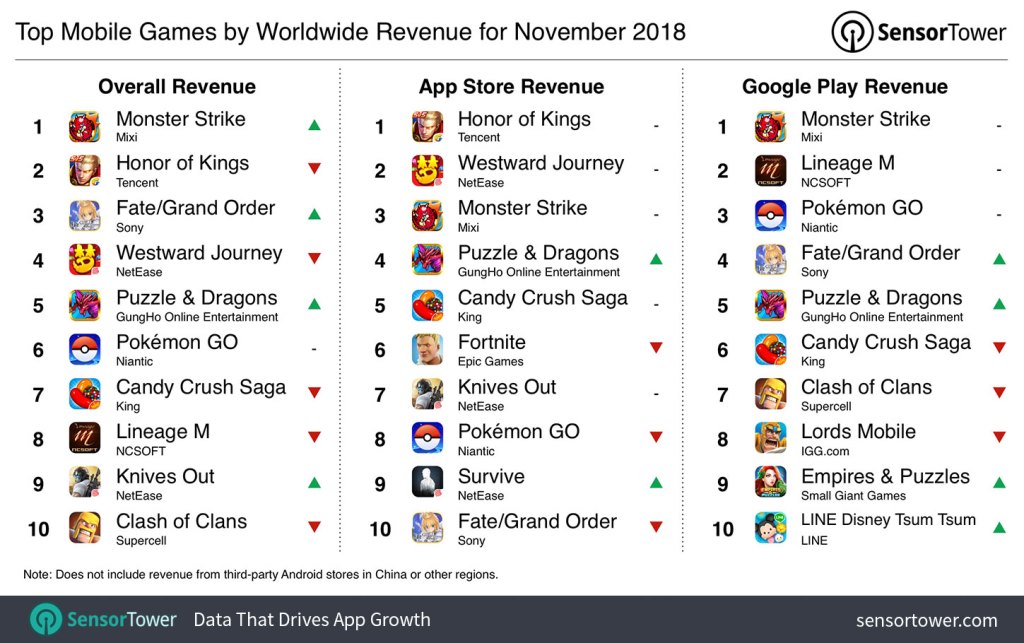 Monster Strike beat out Honor of Kings and Fate/Grand Order to lead the November charts. Sensor Tower head of mobile insights Randy Nelson said that almost all of this revenue came from Japan and that their research doesn’t show any special events that created a spending surge.

“Yeah, it’s still going very strong. Nearly all of that spending was by users in Japan—99.5 percent. The remaining .5 percent is from Hong Kong, Taiwan, and Macau,” Nelson said. “You’ll probably remember that Mixi tried and failed to get the game to succeed outside Japan and ended up dropping support in the U.S. and elsewhere last August after closing the title in China during 2015.”

Honor of Kings is in the No. 2 slot. This counts most the revenue it made as Arena of Valor in the West (that’s it name outside China). “Honor of Kings made up 95 percent of last month’s revenue, however. So that’s just China, and only iOS in the case of our data. Arena of Valor in the U.S. accounted for only about .3 percent last month across both stores,” Nelson said.

The standout from this list, though, isn’t Monster Strike but Knives Out, NetEase’s battle royale. It came out in November 2017, and it did better than its better-known rivals, Fortnite and PUBG Mobile, which didn’t even appear in the top 10. “November was the first month that Knives Out ranked in the top 10 for overall revenue. It was No. 11 in October and has been climbing throughout 2018,” Nelson said.

The one missing name here is Clash Royale. Nelson said “Clash Royale has been on a steady decline in player spending. It ranked No. 13 last month and No. 12 in October. It was No. 8 in November 2017.” 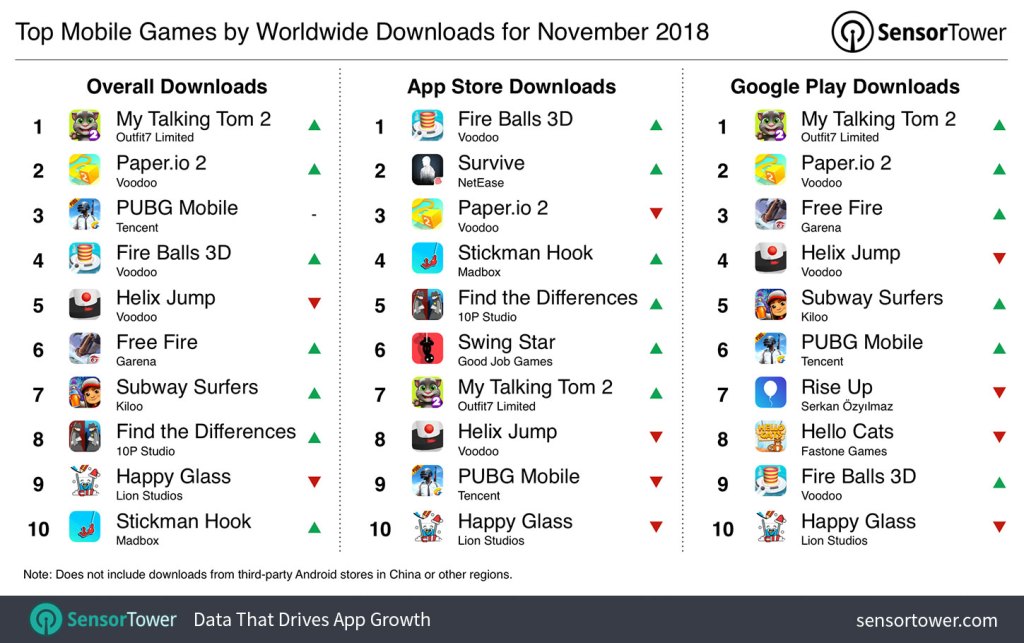 Outfit7’s My Talking Tom 2 leads the overall download list. Turns out it’s pretty strong in South Asia. “My Talking Tom 2 is actually most popular in India so far. It made up the largest share, about 19 percent, of the game’s installs last month,” Nelson said. “So far, the game is much more popular internationally than in the U.S. Only about 8 percent of its downloads to date have come from players here.”

PUBG Mobile shows it has staying power, but remember, Fortnite is on Epic’s store and thus isn’t on these charts. Many of the games on the top downloads list are “hyper-casual” games that studios such as Voodoo specialize in.

Correction, 1:46 p.m. December 12: I reported that My Talking Tom 2 was from Voodoo, not Outfit7. I’ve corrected the error.