Entrepreneurs seeking funding for tech startups have found that some angel investors, their only realistic source of seed capital, now charge them thousands of dollars to listen to their business plan pitches. It’s easy enough for angels to justify the charge for their time, but for some startups bootstrapped via the founder’s own bank account and credit cards, the price is too high.

Claiming the pay-to-pitch model is a loser for both the companies and for investors, serial entrepreneur and investor Jason Calacanis — the money man behind startups Engadget and now Mahalo, and co-host of the annual TechCrunch50 startup launch conference — has set up an intermediary program called Open Angel Forum. His plan is to select a few promising startups, then let their founders pitch their ideas to a group of Calacanis-selected angel investors over dinner. The first dinner is scheduled for January 14, somewhere in Los Angeles. 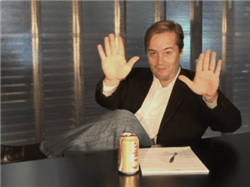 “Keiretsu Forum charges $6,000 to pitch their four San Francisco chapters,” Calacanis wrote in an email to his private mailing list Sunday morning announcing the forum. Entry fees such as Keiretsu’s have been a target of his for years. That’s why TechCrunch50 doesn’t charge its 50 chosen onstage exhibitors, and Open Angel Forum won’t make entrepreneurs pay to meet the angels. Calacanis says he plans to charge a few people — lawyers and recruiters eager to gain work from the startups that attend. But the companies and investors, the event’s core talent, will attend for free.

This morning’s email hinted at who the investors on the other side of the table would be:

I’m inviting the angel investors I’ve developed personal relationships with over the years (many of whom have invested in Weblogs, Inc. or Mahalo.com). Think folks like Sky Dayton, Matt Coffin, Elon Musk, Kevin Rose, Ryan Scott, Mark Cuban, Fred Wilson and Ted Leonsis. I’ve also started angel investing as you probably know. My first two investments are www.gdgt.com and www.challengepost.com. I’ll be announcing two more angel investments in December. My goal is to do 5-10 a year.

The website for Open Angel Forum describes the forum’s methodology and includes an application form for interested entrepreneurs. Web 2.0 visionaries beware: One mandatory field is “How will the company make money?”

It’s hard to think of a downside to Open Angel Forum, other than its size. The forum’s pitch dinners will only include five selected companies. Great for focus, but how many companies per year will get in front of Calacanis’ angels? By contrast, TechCrunch50 puts 50 companies in front of its audience at once every year. Two of those companies, Mint and Powerset, have subsequently been acquired for more than $100 million each, and both companies credit Calacanis with helping them get there. But that’s two firms from a total pool of 140 in the event’s history. If Calacanis wants to change the landscape of startup funding, he’ll need to throw a lot of five-company dinners.