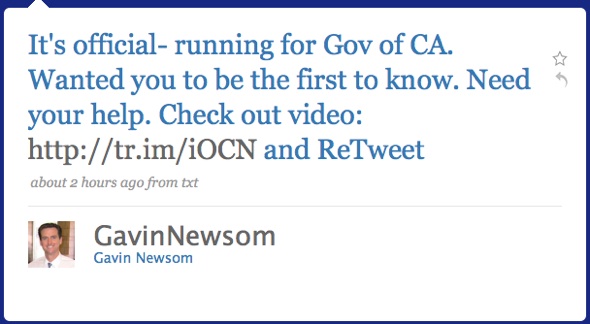 Oh, so maybe that’s what Twitter chief executive Evan Williams meant when he said, “We are Twitterfying SF!” after meeting with San Francisco Mayor Gavin Newsom. Newsom just announced he’s running for the governor of California, and according to his website, the announcement first went out via a tweet on the microblogging site.

“It’s official- running for Gov of CA,” Newsom wrote to his 275,000 Twitter followers. “Wanted you to be the first to know.”

At least for now, Newsom seems to have placed websites like Twitter front-and-center in his campaign. The “action” button on his site leads to a page asking supporters to follow Newsom on Twitter and Facebook, to donate to the campaign via ActBlue, and to upload their videos to Newsom’s YouTube page. Plus, one of the featured stories on Newsom’s website is his interview with Digg founder Kevin Rose. The web has played a big role in Newsom’s efforts before, for example when he used YouTube to post a State of the City address that was a mind-boggling 7.5 hours long.

It’s worth comparing Newsom’s site to former eBay chief executive Meg Whitman’s, which “just” has a link to Whitman’s pages on Facebook and on Tokoni, the story-sharing site whose technology was also used to build MegWhitman.com. (Whitman is at an earlier stage of her campaign, since technically she has only formed an exploratory committee, not announced her candidacy.)

I’ve embedded Newsom’s YouTube video announcing his candidacy here. As you might expect, he spends most of his time talking about the economy, including green jobs and cleantech. Senator Dianne Feinstein is also said to be considering a run for the Democratic nomination. Like Newsom, she’s a relatively moderate Democrat, at least on economic issues. (Newsom, of course, may be best known throughout the state for being further left on social issues, specifically with his support of gay marriage.)