Dutch startup Shapeways, which builds printers that let you design and print your own 3-D objects in a variety of materials including plastics and steel, debuted a color 3-D printer today at the Consumer Electronics Show in Las Vegas. 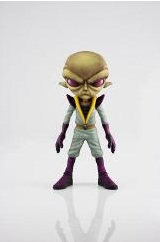 The objects are printed using the Shapeways’ Z printer 650 from a high performance composite (a powdery, sand-like substance) that hardens like a cement to produce full-colour objects. Shapeways then applies a new finishing technique, which both hardens the models and enhances colors. Colour 3-D printing will cost $16.22/cubic inch, which makes it the cheapest of the materials offered by Shapeways.

We last covered the company back in August 2009 when Shapeways made its single-tone printers available to general consumers.

The maximum size of a printed object is 10 x 15 x 8 inches. “It’s still inconceivable to most people that you can actually print an object in 3-D,” says Shapeways CEO Peter Weijmarshausen. “Until now, a Shapeways printed design existed in stainless steel or a single color plastic, black, grey or white, which could be dyed in a handful of single, solid colors. We’re excited to be able to offer our vibrant community the ability to bring their designs to life in full color.

Shapeways is aimed both at users who are familiar with 3-D modeling tools like Solidworks, and general consumers. The latter can buy objects generated from ready-made models or use the Shapeways co-creation platform to customise an object created by a designer, such as a Lightpoem candle holder (pictured).

Although many of the objects may not win any design awards, Shapeways is at the vanguard of a trend towards democratizing physical production in the same way that web technology has allowed millions of people to create and share digital content like videos or podcasts. Giving users without 3-D design skills the ability to manufacture their own objects could unleash a similar burst of creativity in consumers.

The most popular objects currently are home decor and hobby items, and new materials like silver are in the pipeline. Another example of this trend is 100 garages, a site that connects consumers with small-scale, local workshops equipped with digital fabrication tools that can machine, drill or sculpt almost any component they require.

Shapeways launched in July 2008 and has a community of 30,000 users, of which 40% are located in the US. The company is currently funded by Philips Electronics as a spin-off from its Lifestyle Incubator program.