For too long now, email has remained oddly stupid: We can expand an email, forward it, or reply. But for groups of people working together on projects, it’s awful — not to mention overwhelming. Google has implemented something called email “threads” into its Gmail service, which lets us see the back and forths of conversations. But that’s about it.

However, a rash of recent innovation is starting to challenge email as the predominant form of work-flow communication.

Zenbe, a New York City-based startup, is the latest example. The company today has released something called Shareflow. Shareflow is essentially a web-based dashboard that lets you see the flow of communication around a given topic (see image below). In many ways, Shareflow is like Google’s Wave product, released in late May. In each case, the page becomes a stream of things posted about the topic, with the most recent item posted at the top, and the previous posts moving down the page. However, Shareflow takes a step further than Wave by letting you incorporate your regular email into the flow. More on that in a sec. 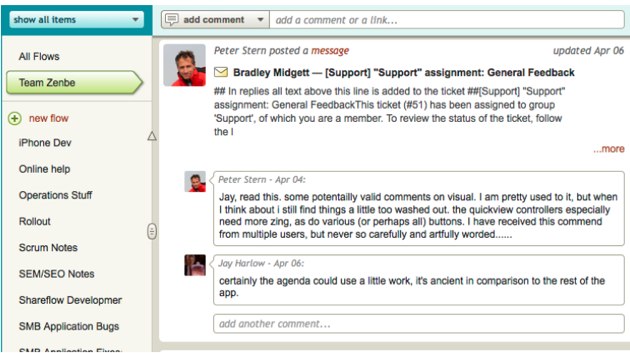 Basically, both Shareflow and Google Wave are different from email in that they let you post text comments, but also other attachments, such as charts or files. A flow can have as many participants as you want. It can include two people, or the entire company, and include people external to your company too. But each flow remains focused on a particular topic.

For some reason Google failed to incorporate email into its Wave project. Zenbe, however, lets you forward your existing emails to your flow, so that they become part of the conversation as well. Chief executive Alan Chung says this points the way to the future, because at some point people will need to begin to make the transition from their main base of communications — email — to flow-based communication.

Once an email is within the flow, people can comment on the email right next to it, basically just like you would with instant messaging.

The drawback, we found while testing it out, is that the email integration remains one step from being complete. You do still have to forward your email to the flow manually, if you want that email to be part of the flow. That’s an extra step, because you essentially still have two products to manage — your standard email account, and your flow. It would be much better to have the email product baked directly into the flow product, so that you can start off a “flow” on any given e-mail thread (without creating a flow that is separate from your email).

Zenbe is well aware of this drawback. Within the next two or three months, it plans to release a browser and Outlook extensions that will allow it to be used with peoples’ existing email. In fact, Zenbe has already built a product that integrates email directly within the Shareflow feature, and it sells that product to small and medium size businesses. Zenbe removed direct email integration for its consumer strategy, because it realized that distribution might be stunted if people were forced to sign up for Zenbe and start using a different account than they’re already using.