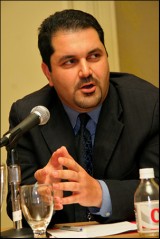 Shervin Pishevar, the entrepreneur and investor who founded the Social Gaming Network, has joined Menlo Ventures as a managing partner.

The move was first reported in The New York Times and was then confirmed on Twitter by Pishevar himself.

He’s is a much-liked and much-respected figure on the startup scene. In addition to starting SGN (which was acquired in April by MySpace co-founder Chris DeWolfe’s social gaming company MindJolt), Pishevar also founded publishing startup Webs, and he’s an angel investor who has backed startups, according to The Times. I was most impressed at the Launch conference when, after some egging from conference organizer Jason Calacanis and the audience, Pishevar committed on-stage to invest in gamification company GreenGoose.

Menlo, meanwhile, has quite a few successful companies in its portfolio, but no social networking home runs. It sounds like the firm wants to change that by hiring Pishevar, who also told The Times that he hopes to start a “people-focused” incubation programming at the firm, a program whose mentors will include a “Jedi council of incredible entrepreneurs.”