Merchant retail platform Shopify announced today that it has launched an app store for its Point of Sale offering. Right now, only five apps are in the store, but it hopes to add more in the future: AppCard, Sales Manager, Turnstyle, Supple Wholesale, and Order Printer.

With this app store, Shopify aims to give brick-and-mortar companies all the power and flexibility afforded to large businesses, but without the expense. Merchant customers can go to Shopify’s App Store, find the app that they want, and download it right to their iPad. Here’s additional details from the company:

You can access your installed apps in one of three ways in Shopify POS. For apps that affect your checkout flow, click the ··· button in the top right to access an app. Other apps are accessed after your customer has checked out. Finally, all your apps and their settings can be found in the Apps section of your Shopify Admin.

Shopify says that it’s still looking for apps to share with its merchant customers, so if a developer is interested, they should get in touch with the company.

While it’s great for Shopify to have an App Store, it’s late to the game. Competitors like Clover and Poynt already have established an ecosystem of third-party apps. But developers benefit by making their apps even more widely available across the major point-of-sale platforms. 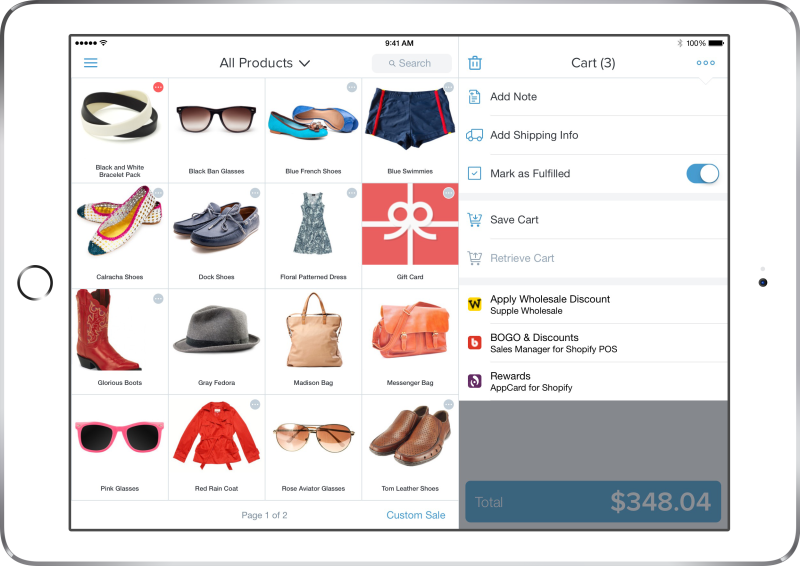 To integrate an app into Shopify’s platform, developers can use the POS App SDK. In doing so, third-party apps will be able to leverage four specific functions: the Shopify dashboard, showing analytics, settings, and more; Edit Cart Action, which will enable users to manage their shopping cart; Add to Cart Action, which lets apps create custom products that are bundled, customized, or discounted; and Order Complete Action, to handle completed orders after payment.

Shopify currently counts more than 160,000 merchants on its platform from around the world, with $8 billion in total sales. Among those include Tesla, Budweiser, Google, the Los Angeles Lakers, and others. Based in Ottawa, Canada, its focus is on small to medium-sized businesses.