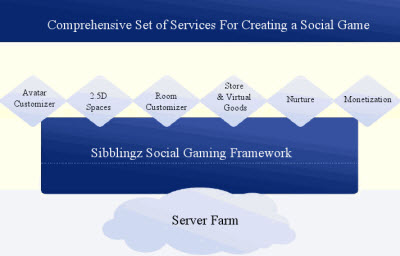 Sibblingz will announce tomorrow that it will enable game developers to create social games that can be played anytime, anywhere, on a number of platforms.

The Mountain View, Calif.-based company has put together everything a developer needs to build and monetize a free-to-play social game on the iPhone, Facebook or a web site. That includes a system to sell virtual goods, where gamers play a game for free and pay small amounts for extra weapons or clothing.

Peter Relan, chairman of Sibblinz, said in an interview that the “universal social gaming” platform will help developers solve some big problems. They can put the same game out on multiple popular platforms so that gamers can log into a game on the iPhone or play it at home on the web or check in on it at work via Facebook.

Relan, who funded the company through his incubator YouWeb, will talk about Sibblingz at VentureBeat’s DiscoveryBeat event in San Francisco tomorrow. This platform can make games more discoverable in an age of noise — a big problem when there are 119,000 apps on the iPhone — because it exposes larger and larger networks of people to the app that you’re using. As a gamer, you can share what you’re doing across multiple platforms, show off your progress on leaderboards to your friends, and otherwise communicate with friends about playing games.

Sibblingz gives away the tools to build the game for free and operates the back-end servers necessary for the monetization. It makes money via a revenue split with developers. The company’s technology is different from Relan’s other company, Aurora Feint (which runs the Open Feint iPhone game platform) because it is cross platform whereas Open Feint focuses on making mobile games more social.

“It’s technically a tough problem to solve,” Relan said. “We’ve worked on it for two and a half years. With this, a developer can build a Flash game for a web site and turn it into a Facebook game without changing anything. It’s powerful to let your players play anywhere, anytime.”

The idea is to lower the risk of developing games. Developers can reduce their dependence on a single platform, spreading their bets onto multiple channels of distribution.

Others have tried tackling different pieces of the same problem. Moblyng has created a platform to quickly publish games on the Palm Pre, Google Android, Facebook, web, and iPhone platforms. And Real Networks has also created its Emerge platform to create games that can run on 1,700 different phones.

But Sibblingz has focused on doing social games on the most popular platforms. Over time, it will add more platforms such as Google Android. For now, the company is launching its private beta of the technology and will work with a group of leading developers to solidify the platform. The private beta will last through the first quarter of 2010.

The platform uses a common set of applications programming interfaces (APIs) across the web, Facebook and the iPhone. The APIs access data stored in a cloud server farm, so that the details of a user’s game are shared across all possible platforms easily.

The company was founded in 2007 by chief executive Ben Savage, and it received seed funding in May from Relan’s YouWeb. It has six employees. Among the developers using it is Blake Commagere, the creator of early games on Facebook such as Vampires, Zombies and Werewolves. Besides Sibbingz and Aurora Feint, YouWeb has also invested in CrowdstarInternational, a social game publisher with the hit Happy Aquarium game on Facebook.