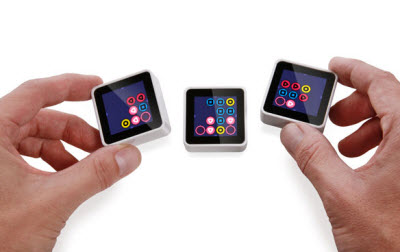 Sifteo, a table-top game startup, is announcing today that it has begun selling intelligent blocks known as Sifteo Cubes. These devices are like little dominoes with displays on one side.

The cubes are wireless, motion-aware 1.5-inch blocks with full-color screens that create unique interactions when moved, tilted, rotated and placed next to one another. Merrill referred to this as “intelligent play,” inspired by games such as dominoes, Tetris, and Sudoku. The devices are really embedded computers, armed with ARM Cortex M3 processors. Merrill said Sifteo created its own wireless protocol so the blocks could talk to each other within a range of a few inches, without consuming too much power. The blocks can connect to a USB stick on a computer within about a 20-feet range. The batteries last about four hours.

The Sifteo Cubes are a clever creation, but will consumers pay for them? You pay $149 for three Sifteo Cubes and $45 for each additional one. Downloadable games cost around $5. If the idea takes off, Sifteo will succeed in creating a new form of entertainment that combines video games, physical board games, building blocks and toys. It may be a tough sell, but there’s no doubt that the company has something very creative on its hands. 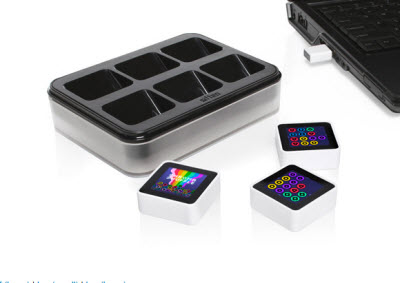 “We’ve found that the people who are most excited about it are puzzle fans,” said David Merrill, president and co-founder, in an interview.

Founded with technology from the Massachusetts Institute of Technology, San Francisco-based Sifteo will start selling its cubes online to U.S. and Canadian customers. The company will also make available its Sifteo Creativity Kit with every Sifteo cube pack. That kit allows users to customize the cubes and create their own versions of games. They can use a simple user interface on a computer to change the faces of the cubes and create their own unique creations.

“It requires no programming experience at all,” said cofounder Jeevan Kalanithi.

With the creativity kit, consumers can create their own word lists or flash cards. Or they can create number puzzles and timed challenges.

On top of that, Sifteo is making its software development kit available to programmers, who can create third-party games. So far, Sifteo will have about a dozen games available at its launch, said Merrill.

Each Sifteo Pack comes with three cubes, a Sifteo charging hub, and a universal serial bus radio link that connects Sifteo Cubes to any PC. Sifteo will begin shipping in September and is taking preorders now.

The company first previewed the games in prototype form at the Ted Conference in February, 2009. Sifteo raised $9 million in May, 2010, from the Foundry Group and True Ventures. Full told, the company has raised $10 million from venture capitalists and the National Science Foundation.

Merrill said the firm has created partnerships with game designers such as Scott Kim, Tyler Hinman, and a puzzle creator who goes by the name Stimulant. Merrill said parents and educators have welcomed Sifteo Cubes as cool educational platforms that focus on spatial reasoning, strategy and planning, patterns and perception, and cooperation and collaboration. Sifteo has 18 employees and competes with a wide range of entertainment, from Apple’s iPod Touch to the Nintendo 3DS.