Linden Lab created the memorable virtual world Second Life in 2003, and it’s still going today. But even as Linden Lab tries to create its Sansar virtual spaces for VR, another rival has emerged to compete to be the place for do-it-yourself creators in VR.

Sinespace is billing itself as a massively multiplayer online sandbox world in VR, and the company is launching what it calls a Certified Creators program to try to boost the creation of user-generated content in Sinespace. It hopes that it can stand out from others because its technology won’t be “pinned in time,” but rather will change with the times as graphics and other technologies move forward.

“Second Life is still running on a renderer that was written in 2002,” said said Adam Frisby, the chief technology officer at Sinespace. “We are trying to build a virtual world that is future proof. The goal of what we are doing is to make it accessible to everyone.”

He said that the company’s monthly active users grew from 10,000 in June to more than 15,000 in August. And Sinespace players are also buying more content from creators, with the average revenue per paying user (ARPPU) in August hitting $20 a month, up from $17 a month in June.

Above: Sinespace has gone through five major updates.

People have uploaded more than 8,000 items, such as clothing or furniture. More than 5,000 are for sale in the in-game store. Top-selling items so far are avatar clothing, gestures, and houseware items. Frisby showed me the world in a quick demo last week. It’s still quite small, but the MMO is still in beta testing, and it’s early days, Frisby said.

He pointed out that while copyright infringement runs rampant on other virtual worlds (ripped copies of video game and cartoon characters, etc.), Sinespace’s Certified Creators program is designed to respect intellectual property rights.

“As a creator, you have to be persistent in fighting off the pirates, and that’s a big problem we want to solve,” Frisby said. “We trust these creators enough so they can release on their own schedule.”

“We manually review and approve every item uploaded by uncertified creators before it goes into our store,” said Frisby. “This is a big part of how we keep pirated material out of Sinespace. It also allows us to invest time and resources in helping creators optimize their work. Since we have a growing community of established creators who we trust will upload original, high quality content, we’re delighted to launch this program.”

To qualify for the program, a content creator must have a track record of submitting original, well-reviewed items to Sinespace (clothing, furniture, etc.) that have not been penalized for copyright infringement or other violations. It will still review content after publication. 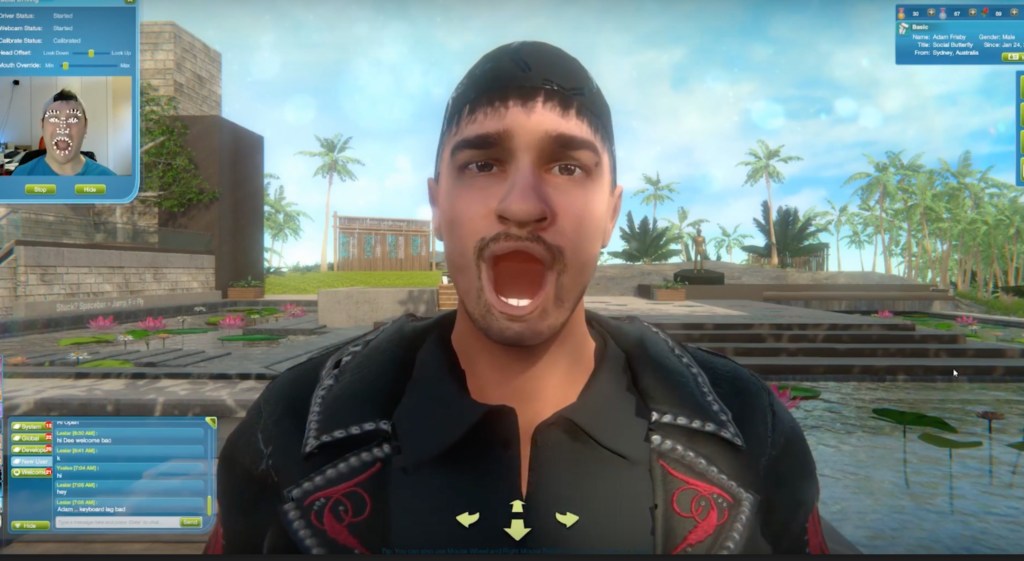 Above: Sinespace can do live face mapping, via a third party.

In an August survey of the Sinespace community, the most popular items to buy in the shop were shirts, pants, and hair. The community also expressed interest in seeing more items in the shop to choose from — especially customized avatar eyes and bodies, along with dresses and shoes. Like in other worlds, users can carve out a virtual space and customize it as they wish, creating places with racetracks or waterfalls.

Frisby has been building the world quietly since 2010, and now there are 20 people working on it. The company survived by creating virtual worlds and running them for other parties. It has learned how to make sure the world runs well, even on low bandwidth. Sinespace has some older elements that date back to 2009, and those elements are still working in the current world, Frisby said.

“All the virtual worlds hit some kind of roadblock in design,” Frisby said.

“Second Life took off into the mainstream, but accessibility was a big drawback in Second Life,” Frisby said.

Meanwhile, Sinespace is working on mobile versions of the world, to make it even more accessible to users.