Sinespace maker Sine Wave Entertainment has teamed up with Unity Technologies to make its virtual reality marketplace objects available via a software development kit (SDK) in the Unity Asset Store. The Sinespace assets are do-it-yourself items sold within the virtual world.

Sinespace unveiled its Sinespace software development kit (SDK) in the Unity Asset Store at the Game Developers Conference. It will also launch a first-person shooter level design contest at Unity parties on Tuesday and Thursday. Unity makes one of the most popular video game engines

This is all part of Sinespace’s bid to outdo Linden Lab, which created the memorable virtual world Second Life in 2003, in virtual reality. But even as Linden Lab tries to create its Sansar virtual spaces for VR, Sinespace has emerged to be the place for do-it-yourself creators in VR.

Sinespace is billing itself as a massively multiplayer online sandbox world in VR, and the company launched in November its Certified Creators program to try to boost the creation of user-generated content in Sinespace. It hopes that it can stand out from others because its technology won’t be “pinned in time,” but rather will change with the times as graphics and other technologies move forward.

Sinespace has gone through five major updates. People have uploaded thousands of virtual items, such as clothing or furniture. They are all for sale in the in-game store. Top-selling items so far are avatar clothing, gestures, and houseware items.

In an August 2018 survey of the Sinespace community, the most popular items to buy in the shop were shirts, pants, and hair. The community also expressed interest in seeing more items in the shop to choose from — especially customized avatar eyes and bodies, along with dresses and shoes. Like in other worlds, users can carve out a virtual space and customize it as they wish, creating places with racetracks or waterfalls.

Frisby has been building the world quietly since 2010, and now 20 people are working on it. The company survived by creating virtual worlds and running them for other parties. It has learned how to make sure the world runs well, even on low bandwidth. Sinespace has some older elements that date back to 2009, and those elements are still working in the current world, Frisby said.

The Sinespace SDK is an all-in-one “virtual world for Unity” SDK for developing & publishing AAA-quality multiplayer games & apps in a shared open world platform that unites the entire development process to a growing consumer base and a virtual currency system with a real money cash-out option for developers.

“We’re so proud and thrilled to bring our Sinespace SDK to the Unity community,” said Adam Frisby. “After twenty years in the industry, I believe this is the beginning of a metaverse that’s worthy of the name.”

With the Sinespace SDK, Unity developers can create new games and market them to Sinespace’s fast-growing player base — or use the SDK’s white label option to launch them as standalone multiplayer games. 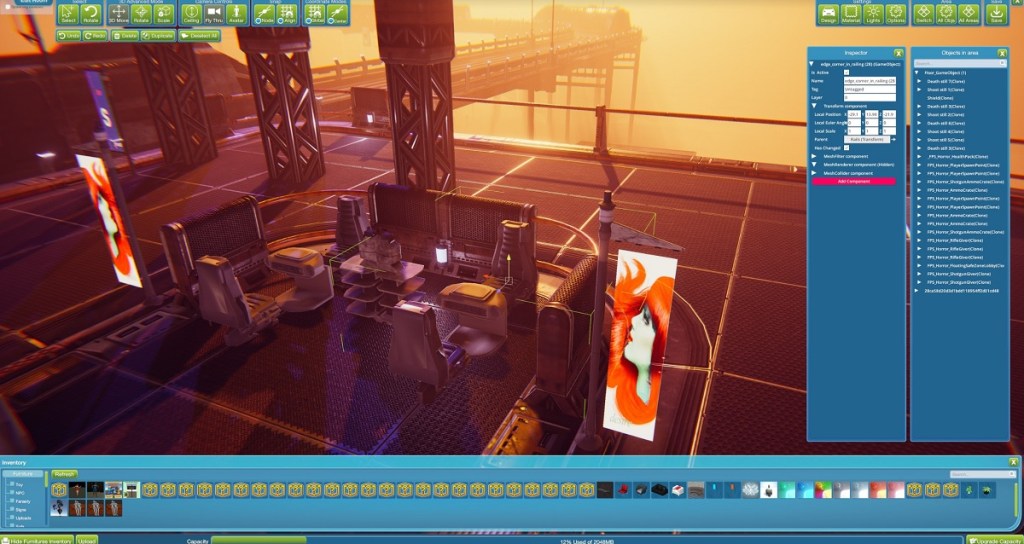 Above: Sinespace is making it easy to build virtual worlds.

The Sinespace SDK instantly optimizes 3D experiences for play on PC, Mac, Linux, Oculus, Vive, Android and WebGL. (Support for iOS and consoles coming soon.) Unlike other open game worlds, Sinespace is architected to fully update all content with every Unity update.

Developers can upload and sell assets from their existing single-player games — or use them in new multiplayer titles. For instance, when Warren Spector made a special guest appearance in Sinespace, his team uploaded 3D models from his latest Unity game into Sinespace.

“I’ve been developing virtual worlds since I was 12,” Frisby said. “Twenty years later, I believe this is finally the start of a metaverse worthy of the name.”