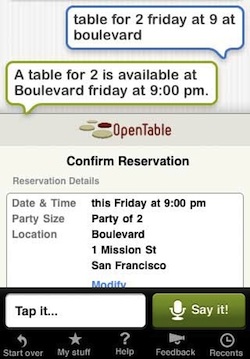 The “personal assistant” label gets attached to a lot of websites and applications, but it’s always an exaggeration. Usually the service in question can only tackle a small slice of what a human assistant would do, such as organizing your emails. Plus, you can’t just tell the app what you want, you have to learn how to use it.

A new iPhone application called Siri has limitations too, but it’s already further along than the competitors I’ve seen, and it has the potential to become a true personal assistant. Basically, you tell Siri what you want to do, and it connects you to the right online service to make it happen.

For example, you could say, “I want to make reservations for two at a cheap Italian restaurant tomorrow night,” and Siri will find appropriate restaurants. You can also ask more general questions, like, “What’s going on tonight?” which will get you a list of nearby event listings. In both cases, the app doesn’t just supply information, but also allows you to take action — you can make a reservation at the restaurant of your choice, or you can buy a ticket for a concert.

To make this happen, Siri uses technology from Nuance to translate your speech into text. Like any voice-to-text technology, it’s far from 100 percent accurate, but I’ve found that when I speak right into the microphone, Siri’s transcription is correct more often than not. And if one or two words are wrong, it’s easy enough to correct. Then, Siri takes your request and uses its semantic technology to figure out what you’re asking and how it can fulfill that request. In the Italian restaurant example, Siri translates the request into “inexpensive Italian restaurants with open tables for 2 tomorrow at 7:00pm,” then returns a list of nearby restaurants in the appropriate price range from reservation service OpenTable.

One of the reasons Siri tends to work pretty well is because it’s focused on just a few categories: restaurants, movies, events, local businesses, taxis, and weather. But co-founder and chief executive Dag Kittlaus said there are plans to add other categories soon.

Siri is coming to other devices too. Right now, the app is only available in the iPhone app store, and Kittlaus said it’s optimized for the iPhone 3GS. Siri works on other iPhone models as well, but slowly — when I told Kittlaus that I would be testing the app on my 3G, he grimaced. From the hour or so I’ve spent playing with Siri, speed isn’t an issue. Sure, it’s a bit slow, but anyone with an iPhone is probably used to lag.

I can also report that Siri has been returning useful results in all of the categories listed above. Perhaps the most impressive moment came when a friend of mine stole my iPhone and demanded, “I want a prostitute!” Lo and behold, Siri returned a list of nearby escort services.

The San Jose, Calif. company plans to make money on the transactions it facilitates with other websites, so the app itself is free. Siri has raised a total of $24 million in funding from Menlo Ventures and Morgenthaler Ventures.