Sixense pioneered hand controllers for virtual reality applications in 2013, but the company wasn’t been able to produce its Stem consumer product for VR. So it said last fall it would refund all of the money raised from its Kickstarter campaign backers and preorder customers. It also formed a joint venture with Penumbra, a health care company that wanted to move into VR surgery training and patient recovery.

Since VR has seen its growth slow in the consumer market, Los Gatos, California-based Sixense and other companies are pivoting into enterprise and healthcare VR. And Breton, executive vice president of product development and president of Sixense Studios, will lead the company’s efforts to develop VR and AR software in those markets as well as retail, training, and entertainment.

Breton will set the strategy for software development, oversee all applications and content creation, and ensure that the company can provide both VR and AR software solutions to their global client base.

“At Vive, we saw a lot of momentum in the last 12-to-18 months in the enterprise space,” said Breton in an interview. “And as we looked across the whole ecosystem, we saw the momentum of companies like Sixense that are finding the right formula. It’s very exciting for me to come and join this company.”

Breton was formerly the vice president of virtual reality content and GM of HTC’s Vive Studios at HTC. He and his team partnered with worldwide content creators to develop showcase content across all categories of VR, including Ready Player One: Oasis Beta, Knockout League, MakeVR Pro, TrueScale, Amazon Odyssey, Jam StudioVR, 7 Miracles, Operation Apex, Lifeliqe Museum, Skyworld Kingdom Brawl, Arcade Saga, Virtual Sports, and RemindVR. He oversaw around 30 or so projects at a time.

He then led Vive Studios’ enterprise software initiative to develop and deploy immersive software solutions for global partnerships in the healthcare, entertainment, education, and design industries. Breton has produced more than 20 platinum-selling video games in his career and has launched games on 30 commercial platforms from the Sega Genesis to HTC Vive.

After beginning his career in product development at Sega of America, his first role as a game producer was for GT interactive, where he became their specialist for first-person gaming and produced Duke Nukem, Anno 1602, Unreal, and the first version of the Unreal game engine.

Breton spent four years at MTV Networks, where he served as director of content and worked with developers around the world to launch online, mobile, and console games. Breton has just wrapped production and launched 7 Miracles, the world’s first feature-length VR film, and winner of the award for VR Film of the Festival at the Raindance Film Festival in 2018.

“I feel like the next 18 months is really a golden era for enterprise AR and VR,” said Amir Rubin, CEO of Sixense, in an interview.

Above: Sixense’s controller can be used to train people on how to spray paint.

Rubin showed me a demo of a spray paint training VR program. I picked up a Sixense controller that had been customized to look like a spray gun for painting cars. I put on the VR headset and tried to paint. After a few tries, I got used to it and could see it was better to learn in VR, rather than wasting real paint. The program showed me where I did well, and where I applied too much paint in one place. Rubin also has a customer that has a training program for welders.

Sixense Studios will make software for a variety of mixed reality platforms.

“My expertise is in software development,” said Breton. “But that hasn’t really been the focus of Sixense, which has been more focused on hardware. That can become a business with squeezed margins, whereas software can be very profitable. That’s what I’m very excited about. Sixense made its pivot into enterprise last year. And I started my pivot at Vive with the partnerships in healthcare and design and tools and enterprise training. So this is a natural move.”

Breton said his team would help create both internal and external resources to showcase what the Sixense hardware can do. Sixense has about 35 employees now.

“We’ll look at outside opportunities and partner with friendly external studios to help us execute on these applications,” Breton said. 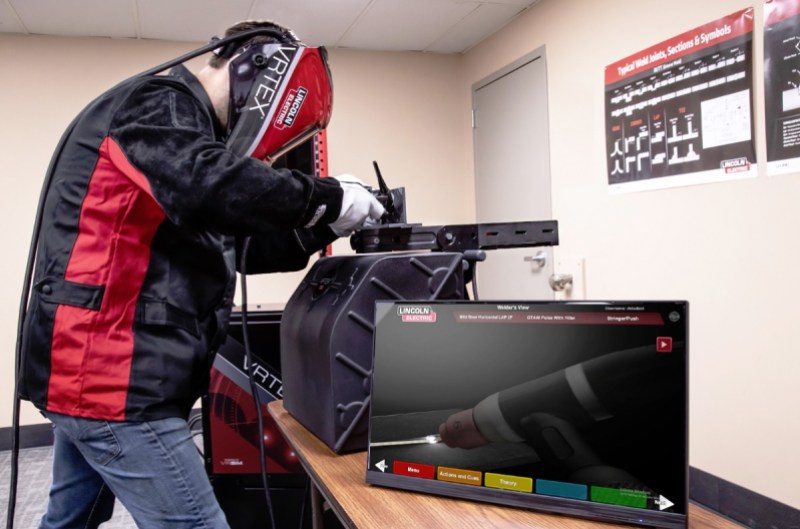 Above: Sixense controller used to train a welder.

Breton acknowledged that the consumer market for VR is taking off slower than expected. The enterprise, education, and other non-game markets could now serve as a bridge for many companies that were hoping for consumer VR successes. And while the enterprise market doesn’t represent a huge number of VR hardware units sold, it is a pretty sizable market in dollars because companies are willing to pay more than consumers.

“Some of the video game systems are hitting 50 million units sold or more, and that’s a consumer market,” Breton said. “Clearly, we’re not there with VR. But the good news is that you don’t have to have those numbers to have a successful business in the enterprise.”

Breton will still consider consumer VR applications if the pitch is right. But the company’s real focus is on the enterprise side. Sixense’s controllers are much more precise, and that’s why they are a good fit for exacting work like health care. And in this market, Breton said that the company has to be very flexible to create customizable solutions for enterprise customers.

“We made the most customizable solution ever,” Rubin said.