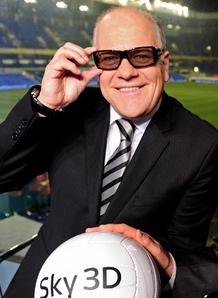 It appears that the blockbuster success of 3D movie Avatar is starting a new trend in 3D entertainment. This Sunday, the UK’s Sky Sports Channel will show a 3D live TV broadcast at nine pubs in the UK. Viewers will have to wear 3D glasses to view the live soccer match between Arsenal and Manchester United.

Sky won’t be disclosing the locations of these pubs in order to avoid overcrowding. According to the channel’s web site, they will have separate teams of camera crew and commentators to cater to their traditional sports channel customers and 3D viewers separately. (Pictured right: Sky Sports commentator Andy Gray in 3D glasses.)

The company has big plans to start offering other TV content to its customers in 2010. After the big success of Avatar on big screen, a number of TV channels are considering the viability of 3D content on TV screen as well. 3D broadcast needs two sets of cameras and a digital processor that combines images from these two cameras into a single frame. Success of this pilot broadcast may start a new trend in TV programming, especially sports.

TV makers, meanwhile, have been preparing for the advent of 3D. At this year’s Consumer Electronics Show in Las Vegas earlier this month, a number of them showed off brand-new 3D models.