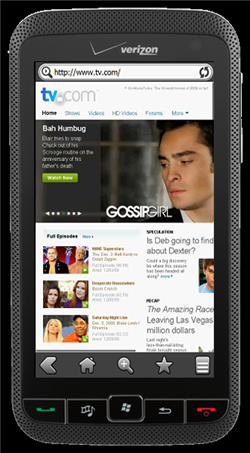 Mobile browsers are replaying the browser wars of the 1990s.

With no clear better-than-the-rest winner, phone owners are trying everything available. Opera, Internet Explorer, Mozilla’s Firefox for mobile (codenamed Fennec until its formal release) and several others have a fighting chance. Even on the iPhone, indie browser iNetDual one-ups the phone’s built-in Safari browser by adding split-screen capability so you can see two Web pages at once.

On Windows Phones — technically, they run the Windows Mobile 6.5 operating system — the Skyfire browser one-upped other browsers this year by playing streaming videos within Web pages, so that they look just like they do on a desktop. Other browsers launch a separate player. Even the iPhone, which can play YouTube videos but not others, hands off video to a separate player.

Skyfire Labs, the Mountain View company that makes Skyfire, will formally release its free Skyfire 1.5 browser for Windows Phone later today. The new version’s features very much play catchup on missing touches: Text is much sharper and scrolling much smoother than the previous versions. There’s a menu bar at the bottom of the browser that includes familiar buttons to zoom in and out, or to star (bookmark) a page. The browser can go full-screen, hiding its frame of user interface controls.

With the Mozilla Organization constantly improving Firefox for mobile, designed to mimic Mozilla’s game-changing Firefox except where there are different needs between a handset and a laptop (think: touchscreen), is there any reason to bother with Skyfire now?

Yes, because Firefox for mobile is focusing on the Nokia N900 as its first platform. Windows Mobile development is “still under active development,” according to Jay Sullivan, vice president of Mozilla’s mobile arm. Translation: Firefox for Windows phones won’t be out until next year.

Once released, Firefox will be tough to compete against. Besides the brand name, it will sync bookmarks and other data with users’ desktop Firefox browsers. It will support Firefox add-ons, small software plug-ins that can add powerful features such as language translation for Web pages. Sullivan says it will also play Flash content in-line. “YouTube performance is good,” he said, but for now the under-development Fennec browser will only support Flash on Nokia’s smartphone. Support for streaming media — Flash, Silverlight, Real — will come from plug-ins created by the makers of those technologies rather than from Mozilla.

CEO Jeffrey Glueck told me that on Windows Phones, Skyfire 1.5 has two advantages over other browsers: Its ability to play video within a page, and its ability to handle large Flash applications such as the homepage of Disney.com, a 50 megabyte Flash app. Skyfire does this by converting the application from Flash to Skyfire’s own format somewhere in the cloud, and serving the converted video in its correct position on its hosting page.

“Everything plays” is one of Glueck’s unofficial slogans. “Go to any site that has Flash, Silverlight, RealPlayer,” he told me in a phone call. “Skyfire plays it on the page, just like on a desktop. Other browsers — iPhone Opera, IE, Safari — give you a plugin error. Google spends millions of dollars to re-encode some YouTube videos from Flash to support some smartphones, but it’s not the full live site. Usually ‘we support Flash’ means ‘we get out of the way’ and launch a separate player.”

Glueck claims Disney’s site and the M&Ms homepage at mms.com are perfect for browser shootouts against Skyfire. “Disney.com is a 50 megabyte Flash animation. That will load in seconds in Skyfire. It won’t load on any other browser in the world.”

Is he right? Let me know (paul@venturebeat.com or @paulboutin) if you’ve got another phone browser that can handle these sites.

One more question I had: Where’s the part where Skyfire gets paid?

“Search revenue share is our current model,” Glueck said. When a Skyfire user searches the Internet, Skyfire gets a cut of the money Google makes by serving ads on the result page. “Rumor has it Apple splits $100 million a year with Google for iPhone queries.” Skyfire has nowhere near that volume of traffic, but the company claims the number of search queries in November was double that of two months before. Since a year ago, according to Glueck, users are up more than threefold, and pagefiews are up sixfold.

“In the future,” he added, “we hope to get revenue through ads on the start page. We also hope to get pre-loaded on Windows Phones. Microsoft lets you set the default to our browser, as long as IE is also there.”

Almost needless to say these days, Skyfire has built-in interfaces and support for Facebook, Twitter, Gmail, and RSS feeds.

Skyfire was founded in 2006 and has raised $22.8 million in three rounds of funding. Investors include Matrix Partners, Trinity Ventures, and Lightspeed Venture Partners.