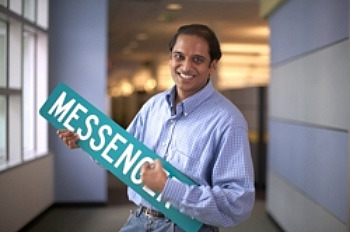 Of course, there’s a potentially juicier reason he’s leaving Skype a mere week after it filed for an IPO: Those in the know told the Times that Skype executives grew concerned over an onslaught of negative comments against Yarlagadda from a TechCrunch post announcing his new position in July. The comments alone wouldn’t force Skype to make him leave, but they may have led to the company uncovering something more serious.

What’s worse is that Yarlagadda sent out a request for former colleagues to post positive comments to counteract the wave of negativity on the post, TechCrunch’s Michael Arrington revealed in a post today. His request garnered some supporters, but it also brought out others who pointed out that he was asking for help.

Like many others, I received an email from Madhu yesterday pleading for me to write a positive testimony of his work on this website. I never liked him and am surprised he didn’t pick that up in our interactions. Maybe he just emailed everyone he still knows at Yahoo! I can’t say we had many negative interactions together but his reputation as a politicker was well known and so I stayed far away from him.

Arrington said that he spent quite a bit of time removing negative comments, but since Yarlagadda’s wife also threatened him with legal action as soon as the comments started appearing, he was forced to hold off on pruning comments while his lawyers got involved. Yarlagadda eventually backed off on the legal front. The “outpouring of negativity was detailed and overwhelming,” Arrington wrote. “It’s just a bad situation all around.”

Yarlagadda was formerly a vice president of engineering at Yahoo, where he was responsible for its personalized homepages, Buzz, and more. Many of the negative comments apparently came from anonymous employees that reportedly worked with him at Yahoo, while another set came from Skype workers who were unhappy with his hiring. The comments implied that he wasn’t the best engineering lead at Yahoo, and Skype employees were unhappy with the changes that immediately resulted from his hiring.