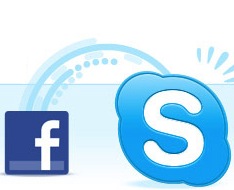 Internet communication platform Skype has added the ability to make video calls to your Facebook friends in the new beta version of its desktop application, the company announced today.

As we previously reported back in July, Skype and Facebook forged an agreement to integrate their services for voice and video calling, which has many benefits for both companies.

With the addition of video chat, Facebook gains a feature that makes it more competitive with Google+ and Gmail. Skype, on the other hand, gains exposure to Facebook’s over 800 million active users — which, in turn, should translate into new Skype users.

To enable the new functionality, you need to download the new beta app (Skype 5.4 Beta for Mac and Skype 5.7 Beta for Windows) and then connect your Facebook account with Skype. Once connected, you just select a Facebook friend and hit the dial button. Your friend doesn’t need to download and/or open the Skype app to receive the call, as it can be done within the social network’s website. Eventually, Skype said, users will be able to make outbound calls to landlines and cellphones from within Facebook.

The new app also has improved video rendering, according to the company. And for Windows users, the new beta gives premium Skype subscribers the group screen-sharing feature that’s available on the Mac.