I’m always on the move. In the 13 weeks before writing this review, I stayed and worked in Berlin, Prague, Vienna, Barcelona, Vancouver, San Francisco, Los Angeles, Palm Springs, Seattle, New York, London, Paris, and Brussels. It would be fair to say staying connected while traveling is imperative to my work and life.

Today, mobile Wi-Fi company Skyroam has released its newest device: the Skyroam Solis. A combined mobile Wi-Fi unit and power bank, it is designed for people just like me. But does it work, and is it better than the original Skyroam device?

Skyroam’s previous box of tricks has been part of my “road warrior” armory for a year now. Instead of buying a SIM card in each country I visit or putting up with the limitations of my U.K.-based mobile data package when roaming (more on that later), I’ve been using Skyroam to access a mobile Wi-Fi signal wherever I am.

Skyroam uses “software SIM” technology to connect to the local mobile data network. It then converts that into a Wi-Fi signal that can be used by up to five devices — more than enough for my needs, with two or three spare seats for fellow travelers, colleagues, and friends. Skyroam says it supports over 100 countries at present. While I’m well-traveled, I can’t confirm it works in every last one of them just yet. I’m working on it.

Skyroam’s devices involve an up-front cost. The first iteration will set you back $79.99, while the new Solis unit costs $149.99. When you want to connect to the local mobile data network, you buy a “daypass,” which gives you unlimited, uncapped data for 24 hours. The new Solis device — 4G instead of 3G — costs $9 per day (a $1 per day increase over the first Skyroam unit).

The original Skyroam is a compact box with a small, two-color screen built in and a few buttons. A simple menu system allows you to find the SSID and password for the Wi-Fi, reboot the system, and perform basic operations.

The Solis, however, is a much simpler affair. Resembling a large ice hockey puck — albeit it one that you can’t possibly miss thanks to its orange livery — it has no screen and just two buttons. The power button sits on the side of the Solis and, frankly, is a little too small. On top, there is a “smart button” that uses a variety of lights to show its current status. 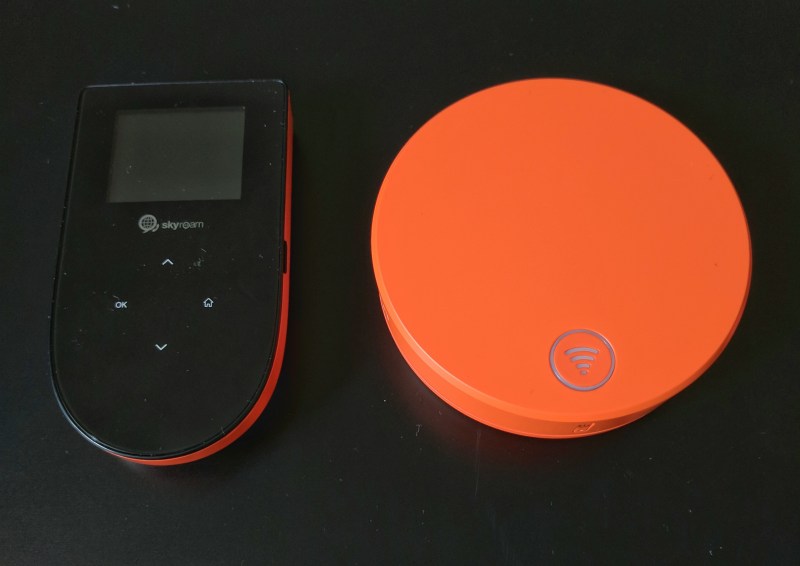 Above: The original Skyroam (left) and the new Skyroam Solis.

Honestly, you don’t need that button right now, though it might come into its own in the future. All of the functions of the Solis are monitored by connecting to the puck’s SSID and launching a webpage. Instead of a screen, the Wi-Fi name and password are emblazoned on the bottom of the unit, making it easy to connect.

After a loading delay, the resulting page shows the battery level, signal type and strength, and how many devices are connected. This is also a webpage from which you can buy a daypass and maintain your account. When you first launch a Skyroam, it gives you twenty minutes of free internet access to allow you to verify your account via email.

But it is that loading delay — something I didn’t have to worry about with the previous Skyroam — that can be a little frustrating. Over a week-long test, I’ve had every imaginable experience. At times, it has taken 30 seconds from a cold start, and other times it has been like watching the metaphorical orange paint dry for up to five minutes. I learned that switching off the mobile data on my smartphone made the launch process more efficient, but it still sometimes takes way too long to get started.

Once you do have access, the first thing to do is buy some daypasses. You can then launch a daypass with the click of a button and begin using its unlimited data. Twenty-four hours later, it stops. Another click of the web-based start button gets you 24 more hours. On the old device, you could select many daypasses at once — I often chose five consecutive days — but it appears that you can only launch one per 24 hours on the Solis. That’s something that Skyroam can likely update in the future.

In addition to providing you with Wi-Fi on the move, the Solis has another feature that the first model didn’t have. It is also a 6,000 mAh power pack, ready to charge your devices as they deplete under the strain of today’s mobile office use. The unit has a USB-C connection and comes with a cable that offers both USB-C to USB-A, and (via an included adapter) USB-C to USB-C. The latter is perfect for charging my Google Pixel.

What isn’t so good is that the output from the Solis is only 1.5A. As a result, it charges my Pixel in “slow” mode (not even “normal,” and certainly not “rapid”), which means that it will only ever be my emergency backup option on the occasion that I’ve been stupid enough to allow both of my Anker batteries to run out of juice at the same time. Still, for devices that don’t support rapid charge, the Solis provides a useful refueling station.

Speaking of batteries, the Solis lasts much longer than its predecessor. I’ve been able to extract a good 15 hours of continuous usage before having to recharge it (ironically, once, via an Anker battery). The original unit used to struggle to last eight hours, in comparison. The improvement is due to Skyroam using the latest Li-Ion battery tech, and the lack of screen (and backlight) must have made an impact on battery life, too.

The one button on the Solis promises to become more useful over time. Skyroam’s VP of global marketing and product, Cory Jones, tells me that it will soon be customizable. “The programmable smart button, GPS, and Bluetooth built into the hardware enable us to add features later this year to help with navigation, personal safety, and control of Skyroam Solis, as well as other devices and apps.”

So, is the Skyroam Solis the answer to Wi-Fi woes and staying connected on the move? My data plan in the U.K. has recently taken a turn for the worse, thanks to new EU roaming legislation that effectively eliminates expensive data roaming charges. My plan with Three UK gave me uncapped data in over 30 countries before the new legislation, but following its implementation, the company decided to cap roaming data at 12GB per month.

For me, that means running out of roaming data within one to two weeks. The cost of roaming after that point would be prohibitive — hundreds of dollars per day. Under these circumstances — and when I can’t find a free Wi-Fi hotspot while working from hotels, apartments, trains, planes, and coffee shops — the Skyroam soon pays for itself. In that context, $9 per day is a steal.

Is it perfect? No. When switching between countries and mobile data providers, as often happens on a train or car journey in Europe, Skyroam can take a good five to 10 minutes to correct itself and provide a reliable connection. But when it is connected and working — which is most of the time — the 4G connection provides strong, stable data access. In fact, I wrote and posted this review on a train from Brussels to Berlin, my Chromebook remaining connected almost throughout the entire journey. And the difference in speed over the original Skyroam is apparent.

Of course, as with any “Mi-Fi” device, the Skyroam is only as good as the mobile signal it can attach to. So far, using either the first Skyroam or the new Solis, I’ve only traveled to one location that was bereft of any mobile signal at all. That was in the middle of the Anza-Borrego Desert and, frankly, I didn’t want to be contacted or bothered by anyone when I was there anyway.

For existing Skyroam users, the company plans to convert the cheaper, 3G daypasses to 4G without additional charge.

“We want to take special care of current Skyroamers that want to upgrade to Skyroam Solis, so we’re offering a free upgrade of their Skyroam Hotspot daypasses to the Skyroam Solis 4G LTE daypasses,” Jones said. “Shortly after launch, we will also offer the ability to have multiple Skyroam devices in one account.”

While the service has a couple of flaws, they are solvable through software updates (apart from the power button, of course, which I wish was a little bigger). Otherwise, the Skyroam Solis is a real godsend for anyone in need of constant connectivity, especially those faced with expensive roaming charges or data limits.

Plus, it doubles up as a handy emergency beacon if you’re ever stuck and need help. Or you fancy a nighttime game of ice hockey. It truly is very orange indeed.

Skyroam provided VentureBeat with a sample unit for the purpose of this review.