Slack today unveiled shared channels, a new feature that allows companies to communicate between companies and teams. Versions of Slack were also made available today for French, Spanish, and German speakers, the first languages available outside of English. Japanese is next.

Shared channels for Slack expands upon Slack for Enterprise, which gives users the option to make channels between teams within a company, product lead Paul Rosania told VentureBeat in a phone interview. Anything that could be part of a regular channel can be brought into a shared channel, including apps and integrations with Google Drive or SAAS products like Salesforce.

“At this point, about two-thirds of Slack teams are using guest accounts, so we’re seeing a lot of organic demand for people to work with a company or individuals outside of their own workspace,”  Rosania said. “I think one of the things we’re most excited about is there’s a whole world of use cases that app developers can build for Slack now that we have this whole multi-team paradigm to start thinking about, so we’re mostly looking forward to see what developers do with that.”

About 155,000 developers use Slack APIs on a weekly basis, a company spokesperson told VentureBeat. Slack currently has six million daily active users, up from four million in October 2016. 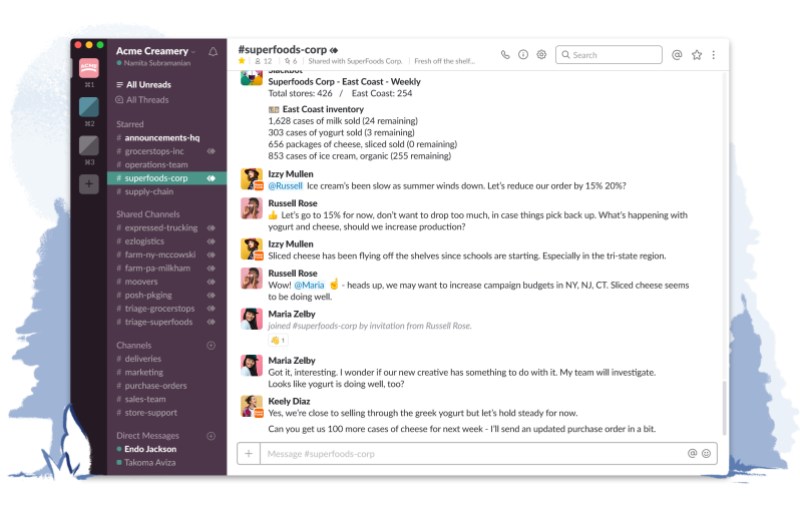 Above: Shared channels on Slack

Early partners for bots in shared channels available at launch include Dropbox Paper documents, Harvest project management, and Zoom for group video meetings, all inside the channel.

The announcements were made today at the inaugural Slack Frontiers developer conference. They come a day after Microsoft announced that Teams will support guest access for the first time. Facebook, another major competitor, brought the power for companies to create groups to its enterprise communication product Workplace earlier this year.

Slack, Microsoft, and Facebook will all tell you that being able to work directly with contractors or vendors or whoever it is your company routinely send emails back and forth with can bring your entire work conversation into one place and change the nature of work. 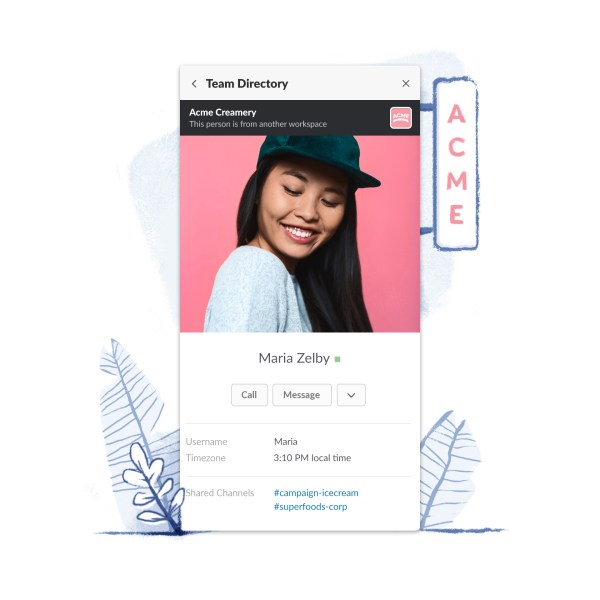 Above: A Slack user’s shared channels will be listed in the Team Directory

The race to capture audience in the workplace chat app space is becoming more competitive and global.

Microsoft announced Monday that Teams is now available in 26 languages and used in 181 markets around the world. Facebook is also eyeing global ambitions for its answer to brands like Cisco Spark, Yammer, and HipChat.

Since its launch in October 2016, Workplace by Facebook has sought customers from large corporations around the world like Starbucks, but also Reliance Group in India and the 150,000 employees of the government of Singapore, director Julien Codorniou told VentureBeat at launch. Workplace by Facebook has also expanded its presence beyond headquarters in London. In addition to increasing its footprint at Facebook headquarters in Menlo Park, Workplace opened offices in Brazil, Codorniou said.

Slack help center content has also been translated into French, Spanish, and German. Localized support offerings will also be made available, meaning customer service will also be in languages beyond English.

Though Slack will make bots available for shared channels, developers will decide if their bot is available in languages beyond English, Rosania said.

“Developers will have access to the user’s locale, so they’ll be able to know if the user would like to converse in a different language, and so it will be up to the developer to decide whether to provide localized versions of their bots. But they’ll have the information they need to do that,” he said.