Slack is adding more talent to its developer advocacy group, bringing on board Bear Douglas to lead the effort. Previously, she served in the same capacity while at Facebook and at Twitter, so her expertise in building relationships with third-party developers will come in handy for a company that’s been expanding its reach into the enterprise of late. 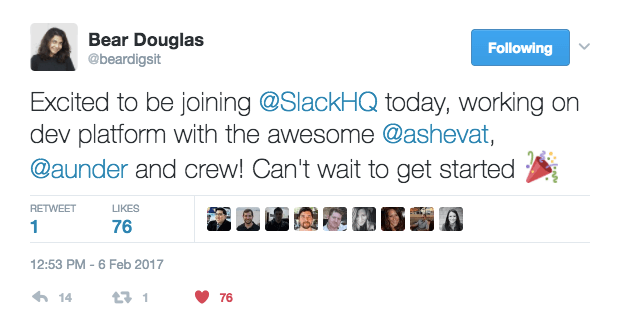 The move reunites Douglas with April Underwood, the former director of product at Twitter who now plays an important role within Slack. As the developer advocate lead, Douglas will be a liaison between the company and third-party developers, encouraging and supporting them to build on top of the team chat and productivity app. At last count, there are more than 6 million apps integrated with Slack.

The addition of someone like Douglas highlights Slack’s interest in the developer community, and her experience at two large tech companies could provide Slack with insights into how to interact with the community and help it scale. 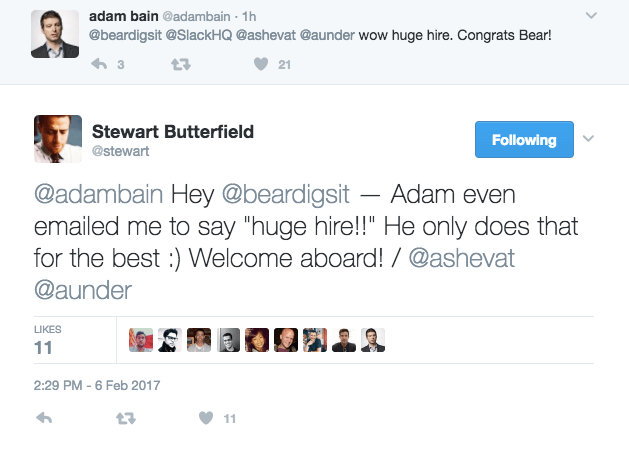 Douglas left Twitter in November, and her departure likely only exacerbated developers’ concern about building on that product. Since 2015, Twitter had been working to rebuild its relationship with developers — Jack Dorsey even issued a public apology for how Twitter had treated them — but there’s been a trend of developer advocates leaving. After just 18 months on the job, head of developer relations Jeff Sandquist left, only to be followed by senior developer advocate Romain Huet, who joined Stripe; senior director of developer and platform relations Prashant Sridharan, who went to Segment; and now Douglas.

And let’s not forget that Twitter sold its Fabric mobile developer platform to Google earlier this year. When reached for comment, a Twitter spokesperson referred us to a previous statement:

Douglas spoke with VentureBeat soon after Twitter’s Flight conference about her role in winning developers back. At the time, she said that “being a part of a company that has open amounts of data is huge, but seeing a company really investing in mobile tooling” was also interesting. She’ll likely find this same experience at Slack.

We’ve reached out to Slack for additional comment and will update if we hear back.

Updated as of 10:05 a.m. Pacific on Tuesday: Slack’s head of developer relations Amir Shevat provided VentureBeat with this statement: “Through Slack’s platform, we’re committed to building a diverse and thriving ecosystem of apps for our customers, and are actively backing its growth and development. Bear will be a huge asset to the team focused on building open source sample code, educating developers about new API features, and fostering a community of Slack Developers.”