Slack has made its next move in building out its platform. At a major press event in San Francisco today, the company announced that it has launched a third-party App Directory aimed at being the de facto source for certified integrations.

In an effort to foster its growing ecosystem, Slack has also established an $80 million developer fund, backed by Accel Partners, Andreessen Horowitz, Index Ventures, Kleiner Perkins Caufield & Byers, Spark Capital, and Social Capital. The goal is to help find the next Slack-first app. Slack and the venture capital firms will provide the money, and funded startups will become part of Slack’s distribution network.

These announcements come as Slack reveals that it now has 2 million daily active users, a 16 percent jump from October, when the service had 1.7 million users. It also now has 570,000 paid seats, up from 470,000 two months ago. 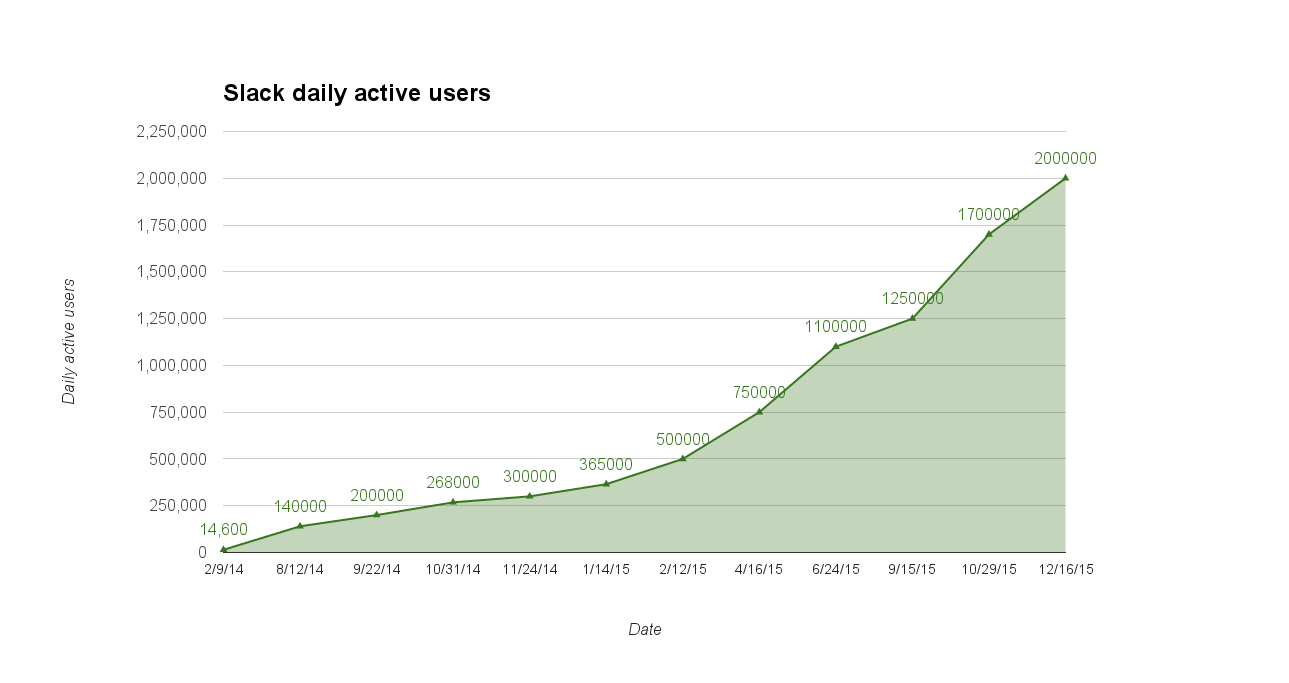 Above: An unofficial chart of daily active users based on numbers that Slack has publicly disclosed, as of December 15, 2015.

With the launch of its platform, Slack is showing that there’s a viable ecosystem and that its $2.8 billion valuation is justified. The launch also comes less than a week after one of its main competitors, Atlassian, went public and revealed that its marketplace for third-party app developers raked in $120 million in direct sales. Slack thinks it can do better, so the enterprise social network wars continue to wage on.

Of course, a motive for encouraging more app integrations is to convert its free users to paid ones. Currently, teams get 10 service integrations, but once you start to pay, you can add as many as you want, along with a slew of other features.

There are 150 apps available for users to integrate into their Slack teams, including those that come from companies like Twitter, Dropbox, Trello, and Google Drive. Until today, the current integrations were all lumped together, but now they’re going to be categorized just like you’d find within the Google Play Store or App Store. With Slack’s App Directory, everything becomes easily centralized for the user, which will aid in discovery. It could also enable the company to restrict certain apps from being displayed if they don’t pass muster. 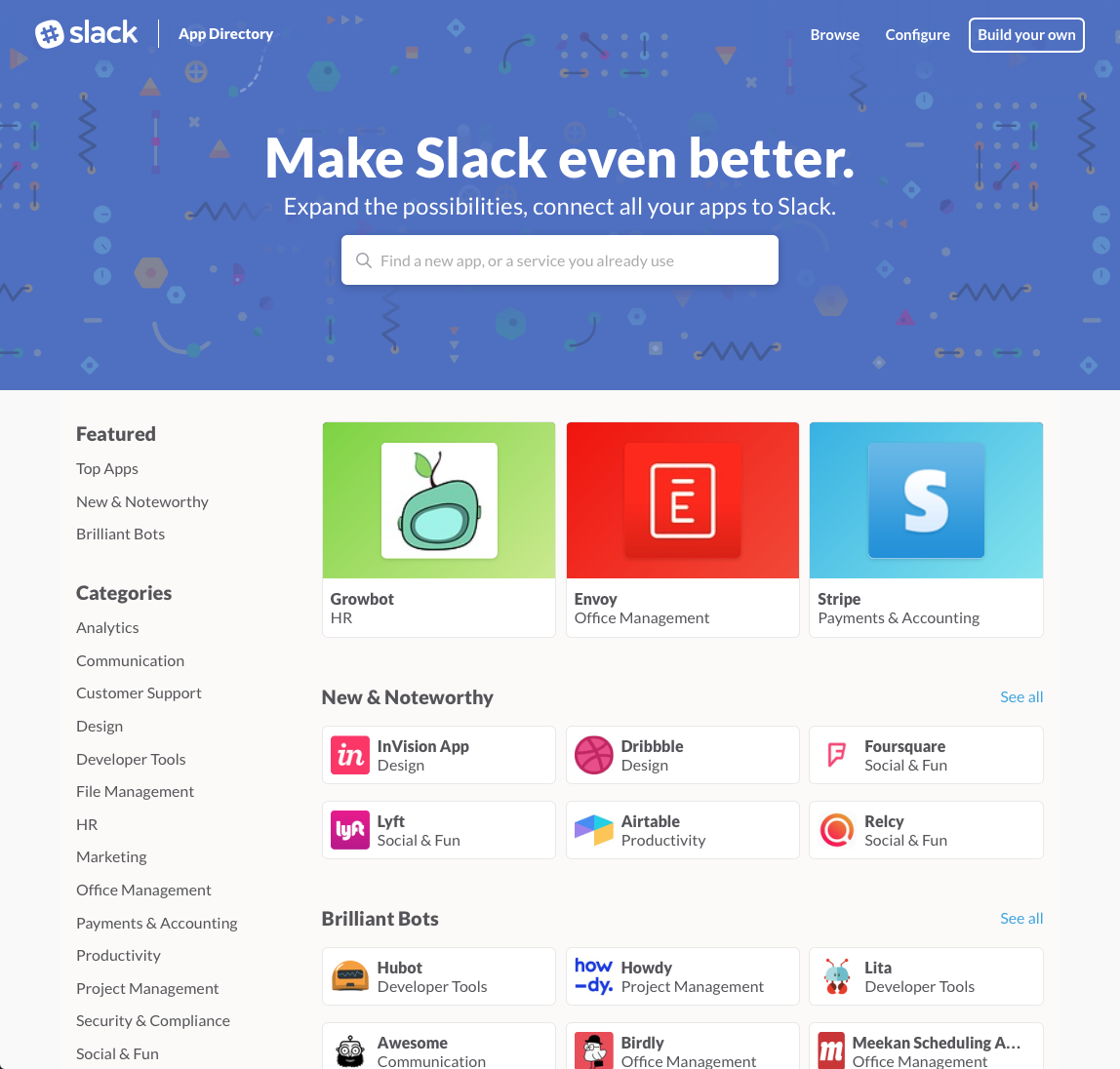 The Slack App Directory will help Slack users find and set up the apps that are needed for work. It’s worth noting that there, you’ll find “approved” integrations, which means that particular developers could be receiving special treatment beyond Slack’s standard API, maybe even a more native integration?

Slack tells us that developers have created 4,000 different apps for the platform, but only 150 have been vetted well enough to be counted as official integrations. The company believes that releasing an App Directory will help avoid an organizational problem, as more apps get approved.

The move into an App Directory will push Slack into even more direct competition with Atlassian’s HipChat Connect — which recently rolled out a new developer API — as well as Facebook at Work, and Microsoft’s Yammer.

Building for the app operating system

The current marketplace is flooded with a lot of these “best of breed” cloud applications, which companies are flocking to. However, users will need to log into each of them one by one, making it a bit of a complex mess. “All the information is scattered,” Slack’s chief marketing officer, Bill Macaitis, told VentureBeat recently. “This is where Slack becomes powerful. It’s becoming an operating system.”

Macaitis is clearly optimistic about Slack’s future, and it’s this thinking that has led Slack to launch a dedicated fund to encourage app development for its platform. This isn’t the first time that a company has partnered with venture capital firms to boost its ecosystem, however. In April, file management service Box teamed with Bessemer Venture Partners and Emergence Capital on a $40 million pool of money.

The first recipients of Slack’s investment are Small Wins, Howdy, and Awesome, however, specific details about the amounts or when funding was provided haven’t been disclosed. April Underwood, Slack’s head of product, said that the company invested in these three companies because of their vision and the makeup of their teams — at least two things that were “indicative of the types of companies that we’ll back.” Slack did say that “further capital will be deployed on an ongoing basis to developers worldwide who are creating apps for the workplace.”

If you’re interested in an investment from Slack, Underwood said you can email them at slackfund@slack.com.

To sweeten the proverbial pot, the company has released several changes to its platform, including updates to its APIs, support for AWS Lambda, and support for Botkit, an open source framework that’ll allow developers to build bots and other integrations on Slack. Interestingly, Botkit was started by Howdy. If you want to know more about Botkit, take a look at our coverage here. 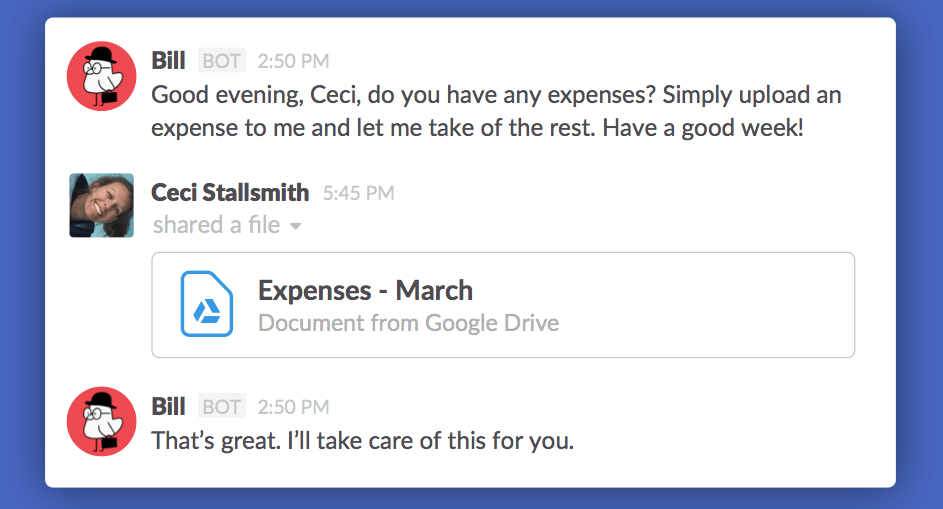 “We’re deeply committed to supporting a diverse and valuable ecosystem of third-party Apps and making them easy to discover,” explained Underwood. “With the launch of the Slack Fund and App Directory, we’ll be able to both support developers, and help our customers derive more value from Slack with a universe of Apps that make their work lives simpler, more pleasant and more productive.”

Slack’s evolving platform has moved beyond simply appealing to developers, and now also holds a place with mainstream business workers. Slack is hoping that these latest additions will show everyone that the platform is viable.

“Bringing together all the great tools you use every day in one place makes lives simpler and creates real improvements in efficiency,” said company chief executive and cofounder Stewart Butterfield in a statement. “If we can make our customers’ use of all their existing tools even 2% better, that’s transformational.”