Team communication app Slack today announced that groups of people using the app’s free tier of service can now integrate with as many as 10 apps. Until now — since the app launched in February 2014 — Slack allowed no more than five free integrations.

The change should come in handy, because today Slack is also introducing a new tool developers can use to easily pump their content into Slack. It’s called the “Add to Slack” button. It should be useful because up until now, developing new official integrations hasn’t always been easy.

“[T]o date there has been a problem sharing custom apps for Slack — getting a copy of someone’s code, spinning up a server, and configuring incoming and outgoing webhooks is tedious and a lot of work,” Slack wrote in a blog post today.

After you click the “Add to Slack” button, you’ll choose the team and the channel that will get the integration. Then notifications and emails can be routed into Slack, and certain apps will also let you push content directly into Slack.

Heroku has previously offered up a button that make it easier to take action on web content with its service, and developers have built unofficial buttons for GitHub. Now Slack is using this approach to increase its presence and make Slack the best place to collaborate. 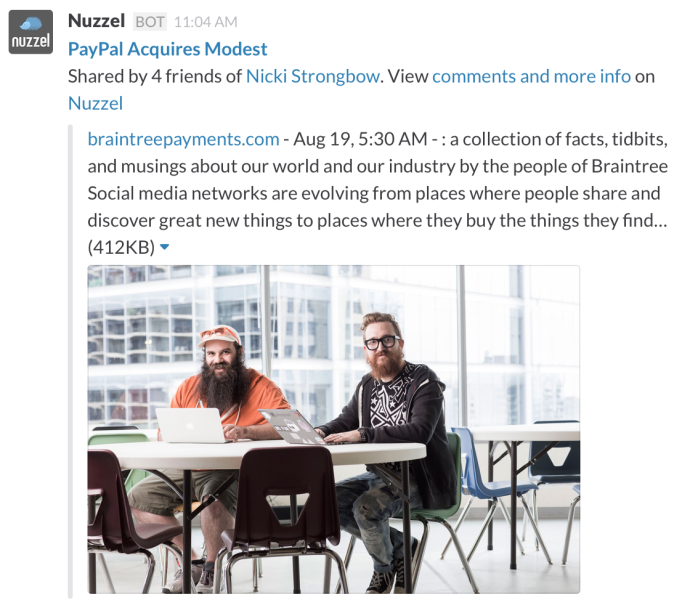 Above: Slack’s new Nuzzel integration, courtesy of the “Add to Slack” button.

Slack, which now has more than 1.1 million daily active users, competes with enterprise social networks like VMware’s Socialcast, Microsoft’s Yammer, and Convo, among others.