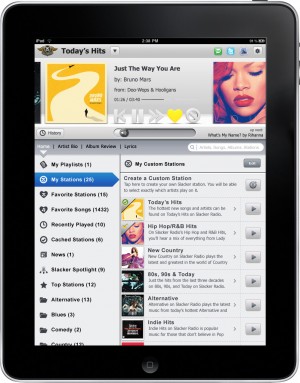 Slacker has been talking about its premium online radio service for more than a year now — and today it finally launched.

San Diego-based Slacker already offered a Radio Plus service, which gives users unlimited song skips and cuts the ads for $3.99 per month. But Slacker Premium is more than just a small improvement — users can now play any song in Slacker’s music library whenever they want for $9.99 per month.

Jonathan Sasse, Slacker’s senior vice president of marketing, demonstrated the premium version (including Slacker’s new iPad app) for me recently and said that Slacker stands out from competitors by offering the full spectrum of pricing options. Other on-demand music services are limiting their audience without a free version, Sasse said (though some, like Rdio, at least include a free trial). Meanwhile, free apps like Pandora are forced to monetize through advertising, and it’s tough for them to add on-demand music because, Sasse said, “In order to have a successful subscription service, you have to have the [music] licenses.”

Sasse admitted that Slacker has struggled with its model in the past, but he said the company has now figured out how to make its business work. Slacker makes money from the two pay services, then treats the free version as a marketing tool (with ads to offset the cost). It isn’t profitable yet, but Sasse said it’s now profitable for each new user — which may not sound impressive, but it means the company is free to focus on growth.

The company has 25 million registered users and has raised about $70 million from investors including Centennial Ventures, Rho Ventures, Austin Ventures, Mission Ventures and Sevin Rosen Funds.