San Diego-based Slacker, the company that wants to take on the iPod with a new type of music recommendation service, has raised $40 million in a second round of funding.

The company, which we first covered in March, is launching in two stages. First, it launched its online player, which we’ve been listening to for several days now (image below), and have enjoyed. This part is similar to Last.fm, in that you can vote what music you like or dislike, and it will personalize a radio station for you based on those choices. It submits other music to you, based on what other people showing similar tastes have also selected.

The second phase will be the launch of a device, later this year, which will be always on through satellite and Wifi connections, and therefore it hopes to trump the iPod and its iTunes service — which are not so connected.

This follows $13.5 million in a first round, as earlier reported.

Last.fm, of course was recently sold for $280 million to CBS last week, after raising a mere $5 million. Slacker, with its hardware, is much more ambitious. 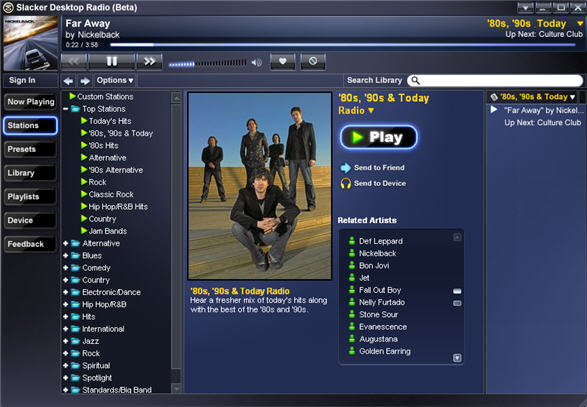