Slay the Spire is all about finding the right mix of items and cards to see how far you can climb up a tower full of dangerous monsters and unexpected encounters. But another thing keeps rising as adventurers tackle this climb: studio Mega Crit’s sales.

Cofounder Casey Yano revealed today that Slay the Spire has sold more than 1.5 million copies. He shared the numbers during a postmortem-like chat at the 2019 Game Developers Conference in San Francisco. It’s an impressive showing for an PC indie game that hit Steam Early Access in November 2017 and hit official release in January.

Slay the Spire if Mega Crit’s first game. The studio formed in 2015 after cofounders Anthony Giovannetti and Yano left jobs in the tech industry (Yano worked at Amazon for five years) to make video games. They’d given game development a go years before as Pyew Pyew Inc., making a small Flash game and an 99-cent iOS release.

Mega Crit’s first game is blends the mechanics of a roguelike with card games. You select a character class and take on the tower, building a deck of abilities, powers, and so on as you defeat monsters, experience mysterious encounters, and bump into a sly merchant.

If that description doesn’t make much sense, you can see the problem that Giovannetti and Yano encountered with getting attention for Slay the Spire. When it hit Steam Early Access, Slay the Spire didn’t record many sales, logging 2,200 in the first two days. As Yano broke it down in his GDC talk: 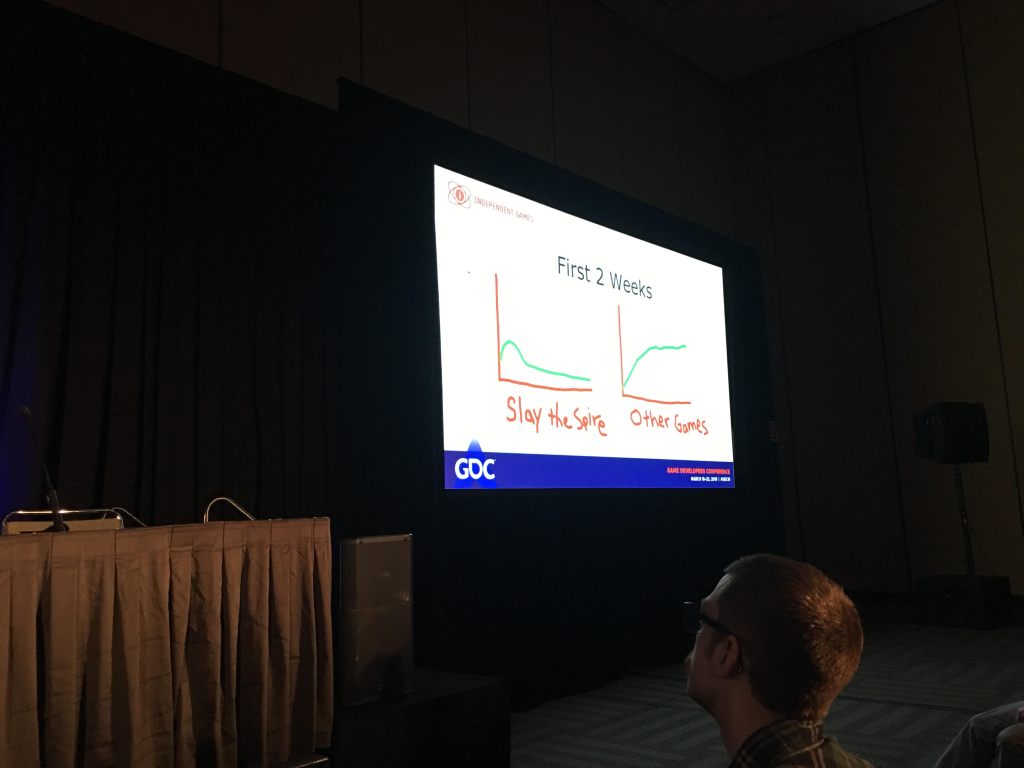 Above: Mega Crit cofounder Casey Yano’s slide shows the initial sales for their indie game at his talk Monday at the Game Developers Conference.

Mega Crit had sent out game keys to a number of YouTube video creators and Twitch livestreamers, along with emails to traditional press. As Yano showed during his chat, those “went into the void” (literally, as the icons he used to represent these different efforts sailed into The Void card from Slay the Spire).

And they were worried, as they noticed that most games do their best sales in their first two weeks. “When’s this going to happen (for us),” Yano said.

But then a Chinese streamer found the game, and Yano said that this person had received over a million views on the breakout stream.

And sales went up.

“We saw a lot of reviews mention that their favorite streamer had played the game, to encourage them to buy the game,” Yano said.

And buy they did. Sales from China made up about 30 percent, the most from any region. As of last April, Slay the Spire had moved over 700,000 copies.

And now it’s over 1.5 million games sold. Not bad for a game that pulled in 2,200 sales in its first two weeks. And it’s another indie success story.