Europe’s GDPR privacy law significantly altered prices and demand for different types of mobile ads in the first half of 2018, according to a report by Smaato, a real-time advertising platform for mobile publishers and app developers.

The San Francisco company analyzed trillions of ad requests and impressions on its platform in the first half of 2018 and found that spending on privacy-compliant ad impressions increased 6.5 times from when Europe’s new regulation went into effect on May 25 to June 30. That changed happened as more in-app publishers offered privacy-compliant ad inventory. Smaato added that mobile ad prices increased 17 percent globally for non-targeted impressions, the result of targeted impressions rapidly decreasing as publishers sought to limit their exposure to regulatory scrutiny.

The General Data Protection Regulation (GDPR) went to effect on May 25, providing a legal framework for protecting personal data across Europe. Smaato described it as causing a shake-up in the mobile advertising world in the first half of the year.

“Smaato has been a transparent partner to brands and publishers through GDPR implementation, and we’re thrilled to be the first major platform to provide data about the effects of the regulation on prices and inventory demand,” said Smaato president Arndt Groth, in a statement. “We believe that the mobile advertising market benefits from having informed participants that can see the effects of major trends on their own advertising business.” 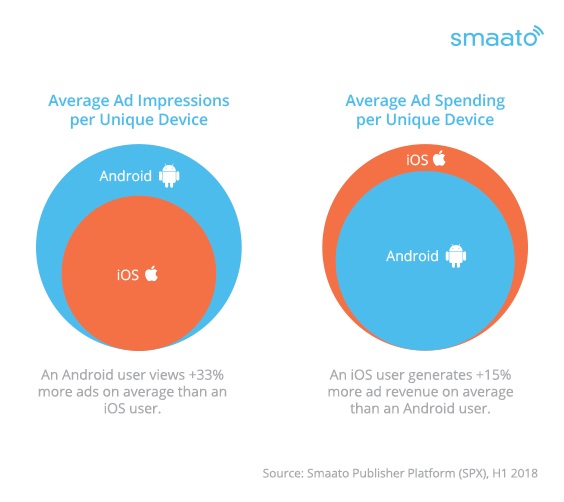 The regulation is intended to give European Union residents greater control of their personal data. Due to strict rules for acquiring user consent, the mobile advertising industry in Europe saw a decrease in advertising supply, but that low supply was paired with increased demand, resulting in higher advertising prices. On Smaato’s platform, this translated to rising effective costs per mille (eCPM) for non-targeted inventory worldwide. Prices for ads rose 17 percent.

Publishers with high volumes of U.S. traffic saw their business grow in the first half. On the Smaato platform, non-targeted ad impressions in the U.S. saw the highest increase in ad space prices, with eCPMs rising 62 percent on average after the GDPR went into effect. The Americas and Asia-Pacific regions also saw rising eCPMs for their targeted inventory post-GDPR. In the Americas, eCPMs for targeted inventory rose 50 percent, and in APAC, they increased 14 percent.

The GDPR applies to any entities, located anywhere in the world, that control or process the personal data of EU residents. Personal data can include geolocation (GPS-based or IP-based), advertiser identification (IDFA/Google Ad ID), Internet Protocol Address (IP), or any other “online identifier” (e.g. device IDs, user names, etc.). To ensure compliance, publishers had to ask their consumers if they consented to sharing their data. That process took some time and caused an initial decline. 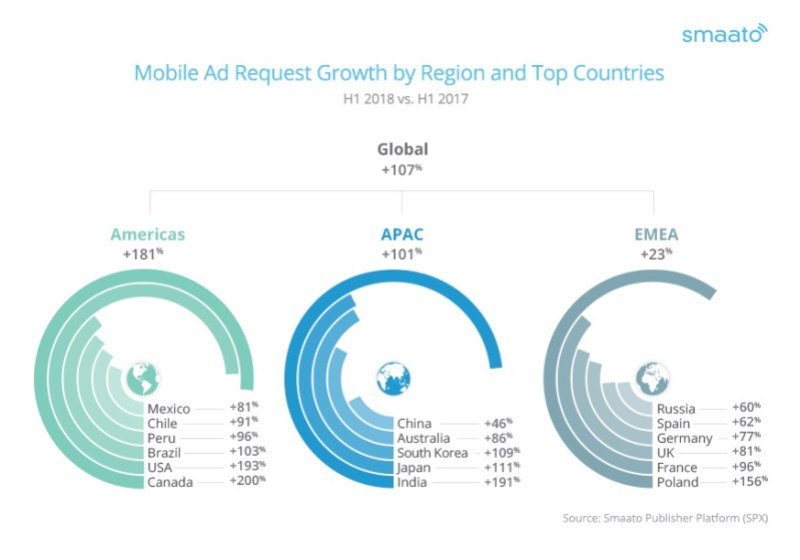 Above: Smaato tracks mobile ad growth around the world.

As the implications of the GDPR (and what it means to be compliant) continue to unfold, Smaato said companies must also begin to prepare for new restrictions in the form of the EU ePrivacy Regulation. The ePrivacy Regulation is designed to work in tandem with the GDPR, focusing on storing and accessing data on a user’s device.

Smaato believes that concerns about data privacy, post-GDPR, may also have driven ad buyers to work more closely with publishers and shift their buying from open auction to private marketplace. This method of buying, in which an advertiser can target relevant audience data on an automated basis at a fixed price, is a way for advertisers to secure specific inventory that has become scarce in the post-GDPR landscape.

Globally, the Smaato platform saw a 107 percent increase in mobile ad requests in the first half of 2018, compared to the first half of 2017. The Americas region drove the most significant growth on the platform, with an increase in ad requests of 181 percent. EMEA showed slower growth rates (23 percent) due to the effects of the GDPR. In short, the U.S. benefited from Europe’s crackdown.

“Smaato has seen a dramatic increase in the scale and demand for mobile advertising in the first half of 2018, even in light of the new European data privacy regulation (GDPR) shaking up the mobile advertising industry,” said Smaato CEO Ragnar Kruse, in a statement. “Our research report provides valuable insights into where the growth is concentrated in a very dynamic global market, helping brands and publishers maximize their own position in mobile.”

Smaato has more than 10,000 mobile advertisers and 90,000 app developers and mobile web publishers. The company manages up to 19 billion mobile ad impressions daily.