Global shipments of smartphones, tablets, and laptops hit 308.7 million in the first quarter of 2013, with 216.3 million smartphones, 50.5 million laptops, and 41.9 million tablets shipped, according to the latest numbers from Canalys.

Once again, Android accounted for 75.6 percent of all smartphone shipments, and once again, Samsung is killing it.

Let me say that again: Apple is at single digit growth in a market growing at almost 40 percent. 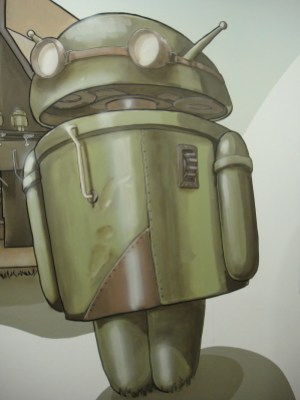 If there’s any doubt why Apple’s stock in moldering in the mid-400’s after hitting highs last year of over $700, that’s why. And with Tim Cook basically telling Wall Street that Apple won’t ship any significant new products until this fall, or even 2014, the situation is not likely to change.

‘Despite its slowing growth, Apple still shipped over 37 million iPhones,’ Canalys analyst Pete Cunningham said in a statement. ‘But HTC and Samsung have raised the bar with their latest handsets and Apple needs to respond with its next iPhone. The iPhone user interface is now six years old and badly in need of a refresh.”

Tablets are one area of slight comfort for Cupertino.

Apple retains 46.4 percent of the tablet market, Canalys says, shipping 19.4 million tablets. That’s down from 58 percent market share in the first quarter of 2012, and once again, in a market growing at over 106 percent year-over year, Apple grew less than others — about 60 percent growth year-over-year.

‘Spearheaded by Google and Amazon, the commoditization of the tablet market has happened far quicker than that of the wider PC market,’ Canalys analyst Tim Coulling said.

Without significant new Apple products, major new product categories, and a much more intense Apple effort to produce a wider range of phones and tablets that the market is looking for right now, Apple share will continue to drop.

And one other interesting tidbit in the Canalys data:

Calculating operating system share over all “smart devices,” lumping in smartphones, tablets, and laptops does provide interesting insights. With that view of the industry, Microsoft ends up with an 18.1 percent OS market share — a very different proposition than high-90-percent share in the laptop/desktop world.