Smashwords is a new startup that will allow writers to publish their books in a variety of online formats, although we doubt it expected to be launching the same day two major publishers announced online initiatives.

The news from the publishers is that HarperCollins has decided to place some books online for free, in hopes of boosting sales, while Random House will test selling a book online by the chapter. More on them in a moment.

Returning to Smashwords, what it does is convert simple documents into a variety of online and electronic book formats for authors, then allow them to sell the results (or give the book away for free). What it intends to be is a portal readers visit to find new books and download them onto their devices, be that a computer, PDA or e-book reading device like Amazon’s Kindle.

The hope is that ebooks, which failed to gain a foothold almost a decade ago, have advanced far enough both technologically and in the eyes of readers to be an acceptable alternative to traditional books. We’ve written more about the recent advances in the display technology behind reading devices here.

A second hope behind Smashwords is that talented authors (including the sizable number who have been snubbed by publishers) will choose to put their work online — a not-unreasonable expectation, as HarperCollins was prompted to its action by foresightful sharing experiments by some of its biggest authors, including Paulo Coelho and Neil Gaiman.

Random House’s plan is a bit more Quixotic. It is testing out selling a six-chapter book at $2.99 per chapter, which adds up to $18. Expecting to receive so much for a digital version is, to put it bluntly, idiotic, but not out of character for large publishers, many of whom wanted to charge more for digital than print versions in the first ebook era.

The quality of planning notwithstanding, is book publishing finally starting to go digital? Maybe, although we’d pin our hopes more on startups than the publishers, who haven’t had to face the same challenges as their counterparts in music.

Smashwords is launching its invitation-only beta today at the O’Reilly Tools of Change for Publishing conference in New York. The company is based in Los Gatos, Calif.

*Full disclosure: The founder of Smashwords, Mark Coker, is also a past VentureBeat contributor. 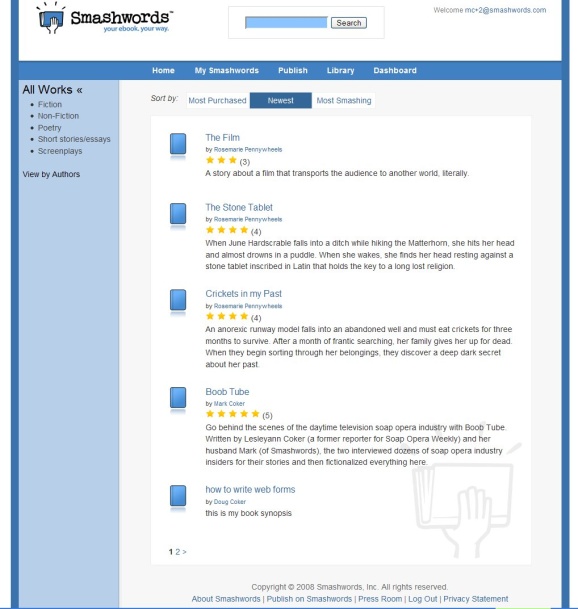