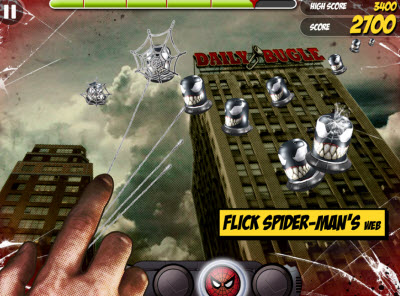 The game is a big part of the strategy for Smith & Tinker, an innovative game company founded by gaming pioneer Jordan Weisman. If it takes off, then the two companies could see a bright future in branded content on mobile platforms.

The title is designed for touchscreen action, giving you super hero powers on your phone. The company began working on the Marvel-branded games last fall, after a few changes in strategy.

The versions of the game range from a free version to a $1.99 standard definition game and a $3.99 high-definition game. In the title, players can slash with Wolverine’s claws, rebound blasts with Captain America’s shield, capture bad guys with Spider-Man’s web and smite foes with Thor’s hammer. The game has 23 classic play levels, three boss levels, an arcade mode, Game Center leaderboard integration, and free content updates.

“With the explosive growth of touch-based smart devices now being adopted by men, women and even trickling down to kids, we’re presented with an unprecedented opportunity to bring our games to a very wide audience on a mobile platform”, said Joe Lawandus, chief executive of Smith & Tinker.

The deal could help turn things around for Smith & Tinker. In 2009, the company launched Nanovor, a fighting game for boys that could be played both online and on a $50 toy sold at retail. But the game didn’t sell that well, despite heavy TV advertising, and Smith & Tinker had to pivot to a new strategy. It laid off a bunch of employees and shifted to online-only games.

The company was able to do that because it raised $29 million in venture capital and because its founders — Lawandus and Weisman — are heavyweights in the game and entertainment industries. Weisman founded entertainment companies 42 Entertainment, Virtual World Entertainment, FASA, and WizKids; Lawandus is a former Disney executive. (Marvel is now owned by Disney).