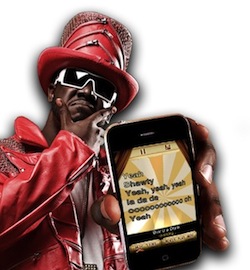 There are lots of music fans out there who aren’t happy about the frequent use of Auto-Tune technology in songs — a viewpoint expressed in Jay-Z’s song “Death to Auto-Tune.” But if Auto-Tune haters were unhappy about the cultural landscape before, a new iPhone application called “I Am T-Pain” will really drive them crazy.

Auto-Tune was developed by Antares Audio Technologies to correct the pitch of a musician’s singing, giving it a distinctive, mechanical quality — you can hear it in the “I am T-Pain” demo video. The technology was first released more than a decade ago, but hip hop artist T-Pain’s Auto-Tune-heavy songs popularized its usage a few years ago. Now, with the “I Am T-Pain App,” anyone with an iPhone and $2.99 can Auto-Tune their voice — you just sing into the microphone, and the phone plays your voice with Auto-Tune correction. You can sing along with T-Pain songs (the app shows you the lyrics), or sing anything else, then share the recording with friends via email or social networking sites.

This feels like a change of pace for app developer Smule, whose previous releases Ocarina and Leaf Trombone weren’t tied to any specific musician. Not that the change is a bad thing. T-Pain’s fame should help sell apps, and this might be first Smule app where users could realistically record songs that sound like what they hear on the radio. (I enjoyed the pop music covers in Smule’s “This Contest Blows” promotion, but you wouldn’t really mistake someone playing the Ocarina app with a professional musician backed by top-notch production.)

Chief Technology Officer Ge Wang says T-Pain approached Smule about creating the app — apparently he has been a fan of the Palo Alto, Calif. startup’s apps for a while now. Asked if this feels like a new direction for Smule, Wang says:

It is indeed a unique departure from Ocarina and Leaf Trombone (though, we’ve also previously released a lighter, a firecracker in Sonic Boom, a voice changer in Sonic Vox). We founded Smule to deeply explore how something like the iPhone can fundamentally change the way people express and interact. One year later, while we’ve learned a great deal, we will continue to charge into the future of mobile. I think we revel in the notion that we don’t know but are driven to find out. “I am T-Pain” is our latest experiment, both as a product and also in working together with collaborators like T-Pain and Antares. At the same time, we remain deeply committed to continue exploring the future of social music- making as we’ve begun to do in Ocarina and Leaf Trombone.

Smule has raised a total of $5.7 million in venture funding.