Coming off the heels of Snap’s Q2 earnings, its second report since going public in early March, it seems as though Wall Street is mainly concerned with one thing: user growth. But that’s the wrong metric to use when determining advertiser adoption, which is the ultimate revenue driver for the company.

To truly gauge the potential of Snap – or any other ad-supported property ­– investors must consider the key performance indicators that truly matter to marketers.

I’ve worked with a number of the world’s largest advertisers over the last 20 years, and when it comes to media buying, brands are not focused on how fast a particular channel is growing; they’re focused on whether the property has a large enough concentration of a coveted target market and the right advertising formats to engage that market. In this sense, audience size, composition, time spent, engagement, and impact are the primary metrics.

For advertisers, once a channel reaches a certain scale, it’s going to have a pretty stable place on the media plan. At this point, incremental growth is less important to advertisers than the ability to effectively reach the current audience and compel them to action. Just look at linear television – its audience isn’t growing gangbusters, but the eyeballs it does have are highly-engaged and the ad formats are high-impact. That’s why TV still commands 35 percent of all advertising spend – more than $70 billion in the U.S. When Snap went public, it drew comparisons to television, and for good reason. It boasts a similar captive audience and features rich brand advertising replete with sight, sound, and motion.

Another factor to consider is that the typical Snapchat user is in the highly-valuable 13-24 year-old – expanding into 18-34 – demographic that advertisers what to reach to form lifelong brand preference. This audience is not easily found on linear television these days, and the amount of time these people spend with Snap is staggering. Furthermore, they’re demonstrating a willingness to engage with brands who create tailored messages as evidenced by the strong video view and swipe up rates we’re seeing among the hundreds of advertisers using our platform to buy Snap Ads.

When it comes down to it, the growth of any channel stems from keeping a close pulse on the demands of its users and its customers. Snap continues to roll out innovative new features for Snapchatters and advertisers alike. Snap Map and Snap Publisher are just two recent examples. The latter helps brands quickly create vertical videos, which had previously been a barrier to adoption.

While user growth for Snap may not be accelerating as quickly as it did in previous quarters, advertiser growth is booming. Advertising revenue jumped 146 percent year-over-year, and my group’s own data shows that after the first full quarter following its IPO, Snap Ads spend grew by 101 percent. Among the brands my team is working with, we’ve seen advertiser count on Snap increase by 15x and total spend grow by 22x since October 2016. 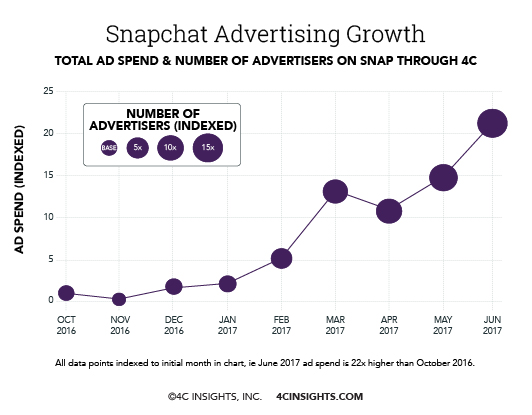 Clearly, Snap is delivering for advertisers with its current audience, and we’re only just scratching the surface. Wall Street needs to stop harping on user growth to determine Snap’s future potential. At the end of day, advertisers care about the ROI they’re getting from each channel, and Snap has proven its ability to drive business outcomes for brands. Increased spend is the best evidence of that, and time spent with the target audience is the best proxy metric.

Despite the slowing of user growth, advertisers aren’t going to ditch Snap, and Wall Street shouldn’t either.