Social music startup DropPlay launched today, tying together YouTube, Facebook and a recommendation service similar to Pandora Radio to provide what the company claims is the equivalent of a free online version of iTunes. The site lets you search for any song (which plays as a YouTube video), save and add songs to playlists, share music with friends via Facebook Connect, and discover new music based on previous selections.

When you first navigate to the site, it gives you the option of signing into Facebook through Facebook Connect. Doing so adds a folder to the sidebar called “My Friends’ Music,” displaying all of your friends who use the service and the songs they’ve added to their playlists. It’s the first music site of its kind to offer this feature. It also adds a box under the small YouTube video screen that lets you type in a friend’s name to send them a particular song.

Whether you’re signed in with Facebook or not, you can create playlists to help you organize the music you’ve found on the site. When you like something, you click “Save to My Songs” — then you can drag and drop the file to any playlist, or to any friend who’s listed (to post the song to their wall). You can also click on the “Play Similar Songs” or “More By This Artist” buttons to get recommendations you may not have heard of before.

“We’re really just trying to make it the best music player and sharing experience,” says co-founder Christopher Pedregal. “The way we envision it, people could have it open in a window, listening to it as they work all day.” 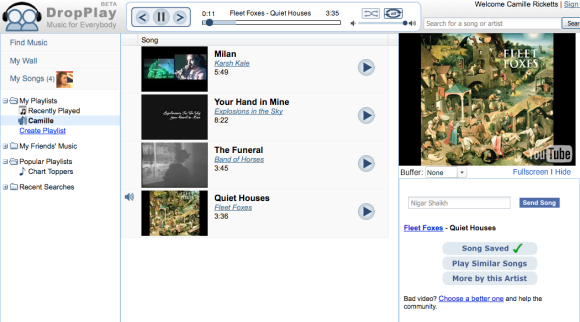 It’s early yet for fledgling DropPlay, so the interface is still a little rough, and some parts of the page are slow to load. But those issues should be simple enough to resolve, and the core of the product is compelling enough to merit attention. One concern is that many YouTube music videos are live recordings, which may not be exactly what users are looking for. Then again, people might not know that’s what they wanted until they see it. It cuts both ways. Also, as ReadWriteWeb points out, there is currently no way to export playlists to any other site or music player, which could probably come in handy down the road.

DropPlay’s competitors include Muziic, another service that streams songs from YouTube. Its interface is pretty slick and incorporates many of the same features but doesn’t have the same strong social dimension. Also, whereas Muziic is a download, anyone can use DropPlay straight on the web. To a lesser extent, DropPlay might butt heads with online juke boxes like SeeqPod and Songza, which also lack social network functionality on their own sites (they both have their own Facebook applications, however).

Founded by recent Stanford graduates in Silicon Valley, DropPlay has yet to take in any funding and has no concrete plans to monetize its service. Pedregal says they’ll wait to gauge reaction to this initial version of the product before rolling out any changes.