With Myspace and now Facebook showing the power of social networking, the giants Yahoo and Google are busy trying to build their own. It’s a race to be the central node of the web, by combining search with communities.

Meanwhile, Facebook is going the other way. While it already has a great social network, it is now focusing on search, hoping to let people more easily find other people and things around them.

Maybe all three will meet in the middle? (Let’s put aside Microsoft, AOL, News Corp. and others for a moment — although MSN Live Search is doing surprisingly well.)

First, Google and Yahoo appear to be searching for better ways to integrate user data in one place from across their many applications. More details on Yahoo Mosh at Techcrunch, but little else is known.

On Google’s Socialstream (screenshot below), there’s much more at Google Operating System:

This core feature will allow you to have accounts on more social networks, but centralize the information about your contacts in a single place. This also assumes that other social networks have an API and don’t act like walled gardens, which is not the case right now. Socialstream used data from blogging and photo-sharing sites like Blogger, Flickr and Picasa Web Albums…The goal of Socialstream is to present social information in a way that ties it to the person who posted the information, and not the site from which it came…Like with any feed reader, you’ll be informed when there’s new data for a contact. The site also includes a Google Talk-like sidebar with all your contacts. The contact list is a structured method of viewing updates, so if a user is interested in a particular person they can navigate directly…

While element of Yahoo’s project are secretive, one thing is sure: It’s applying its also-ran search engine to its still-popular community properties. Yahoo got social networking before Google. Now, Yahoo is getting more traffic by integrating its social photo-sharing site, Flickr, with its image search: This helped lead to a 38 percent increase in traffic from 4 weeks ago, according to Hitwise.

Meanwhile, Google’s “universal search,” introduced in May, displays YouTube videos more prominently in its search results: This led to an eight percent increase in YouTube traffic as a portion of Google properties, Hitwise reported in early June. Then in late June, traffic leaving search engines for video sites quadrupled over the last year, according to Hitwise. YouTube was the main beneficiary, it found.

Last week, Facebook announced that it would be putting considerable effort into improving its own search engine, pointing out that the site gets over 500 million searches a month — as opposed to Google’s 3.9 billion and Yahoo’s 2.0 billion monthly search queries. Also, Facebook claims to be the No. 1 ranking photo site, at least since February In May, it said it had twice the traffic as its nearest competitors. This suggests there is a social engine inside Facebook with considerably more horsepower than Yahoo.

Where do startups get left in the face of such consolidation?

Facebook, has gone the furthest by opening its platform to developers to build their own applications that can be inserted directly into profile pages and freely make money. The external part of the Facebook API forces developers to access its site to get its data, however — unlike Flickr’s API, which allows developer to freely export everything they’ve ever added to the site. All three companies offer API’s (application programming interfaces) to, in some manner, help outside developers build useful, freestanding applications.

And where does this leave users? This writer, for example, uses Facebook for social networking, Google for its apps and search, and Yahoo things like social bookmarking site Delicious (which we’ve been told has doubled in size this past year, also because of Yahoo integration): Three logins, three identities. Can Google’s SocialStream change that, with its focus on bringing a person’s information to a single place? That’s the Shangri-La of the Web — and if it doesn’t concentrate more information and power in Google’s hands, that’s probably a good thing. 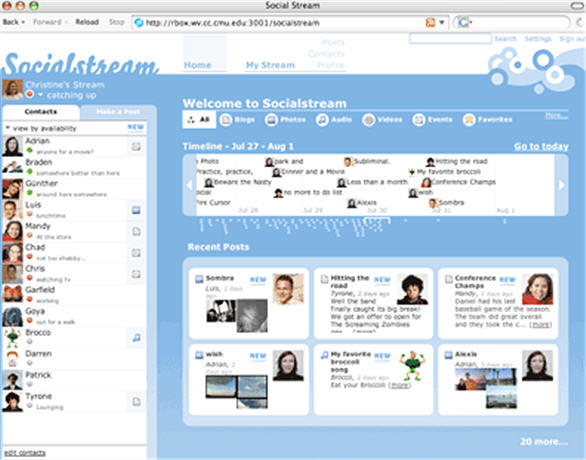