A growing percentage of people are wising up to the consequences of willy-nilly friending and status update-posting.

The Pew Internet and American Life Project, which surveyed 2,277 adults 18 and over, determined that two-thirds of people online are using social networking sites, but these folks are also now more likely to correct for their past friending mistakes. 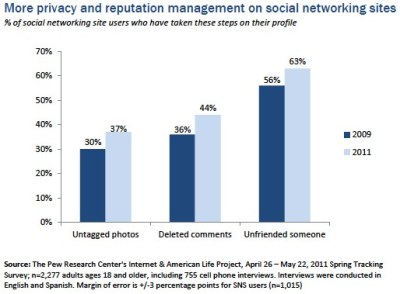 Sixty-seven percent of American women and 58 percent of men who maintain social media profiles delete people from their network, according to Pew’s findings, published Thursday in a report titled “Privacy management on social media sites.”

Altogether, 63 percent of adults have deleted friends (up from 56 percent in 2009), and 44 percent have deleted others’ comments from their profiles.

Privacy appears to be the new preference of social media denizens. The majority of social network users (58 percent) have set their profiles to private, and just 20 percent of adults said their profiles remained public.

Women are especially keen on privacy: 67 precent of women, compared to 48 percent of men, set the highest privacy restrictions for their profiles. Men, however, are twice as likely (15 percent) as women (8 percent) to regret posting content.