Comparisons between the Xbox One and PlayStation 4 home gaming consoles usually revolve around chipsets, display resolutions, and controller designs. But integrating social tools and fostering online community may be the most influential factors in which of the two take the superior position in terms of market share and consumer loyalty in the eighth generation console war.

According to Entertainment Software Association data from 2013, 62 percent of the video game audience played games with others, either in-person or online, and 77 percent of them did so for at least an hour a week. The success or failure of Microsoft’s and Sony’s newest consoles will be tied to how they leverage this audience — and the strength of the online communities they create to hold these players once their attention has been captured.

Xbox 360 was for gaming, PlayStation 3 was for entertainment

Nielsen’s 2013 Gaming Report gives us a snapshot of how American consumers interacted with the Xbox 360 and PlayStation 3 last year. The ways Microsoft and Sony chose to reveal the Xbox One and PS4 in 2013 make perfect sense when we consider that the Xbox 360 was the clear winner as a gaming system and the PlayStation 3 was the clear choice for entertainment features.

Remember the consternation when Microsoft chose to reveal the Xbox One through its media functionality? It needed to demonstrate that the Xbox brand could compete in the entertainment sector. When we look at console use purely for gaming in 2013, however, the numbers do a 180-degree turn, which is why Sony has tried so hard to position its system as being “for the gamers.”

Unfortunately, neither Nielsen nor the NDP Group have detailed information about why consumers preferred the Xbox 360 over the PlayStation 3 for gaming. We have to make a supposition that considers the differences between the two. They’re roughly comparable in terms of hardware power. They both have excellent sets of platform-exclusive games. The Kinect is an obvious difference, but it was also never considered an effective tool for gaming, and therefore doesn’t seem reasonable to consider as a potential explanation.

The most obvious difference between the two consoles is how they handled online community and social interaction. Microsoft offered an improved and robust experience with Xbox Live. Sony offered PlayStation Home. The two services are radically different, and it would be difficult to find an unbiased critic who cites Home as the better of the two. The Xbox 360 also offered chat services that were clearly superior to what the PlayStation 3 offered. In a market where 62 percent of consumers are gaming online, these sound like reasonable explanations for user preference between the two systems. 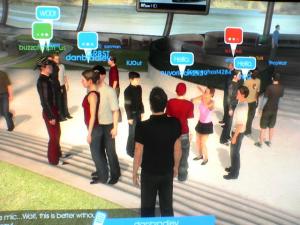 In an interview published in December 2008, Jack Buser, the then-director of PlayStation Home, said, “We really consider Home a ‘3D social gaming community.’ A place where our community can go and meet their friends, meet new friends, visit themed public spaces. … Create a custom avatar and virtual space, but the crown jewel of our service is the ability to jump from home directly into our online games together.” Buser also said that Sony saw Home as “revolutionizing the concept of the ‘friends list’ for console gamers.”

A year later, Sony was presenting Home in a different light. “In the early days when we built Home, we really were building a social network for gamers … through that, over the last year, it’s developed into a game platform, first and foremost,” said Buser in an interview published in October 2009. Home was a platform for minigames, themed virtual spaces that marketed PlayStation titles, and microtransactions for avatar items and games. Home is currently accepted as a very strange space within the video game world and rarely spoken of as a social hub.

Microsoft took a much simpler approach to online community with friends lists and chat functions. Xbox 360 users could chat 1-on-1 regardless of which game they were in, but audience feedback made it clear that the system was too limited. In 2008, Microsoft patched on Xbox Live party chat to the Xbox 360. “The most important metric is usage, and party chat is one of the most frequently used forms of communication on Xbox 360,” said Richard Irving, the Xbox group program manager. Microsoft also introduced tools that allowed players in a party to smoothly join each other in online games.

Microsoft has also split its audience between the Xbox 360 and Xbox One. Users on either system can text-message each other, but they can’t form party chats between the two systems. It isn’t as though Microsoft couldn’t make this happen. “We are always looking to improve the gaming and entertainment experience,” said Irving. “While it could be possible for party chat across consoles, we don’t have anything to share about introducing the capability at this time.”