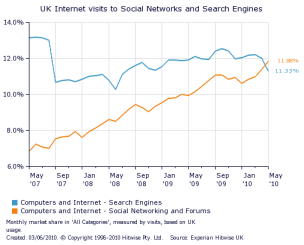 In May, Web metrics company Hitwise claims that social networks were visited more often than search engines by users in the United Kingdom. It’s a milestone that’s been foreseeable since September 2007, according to Hitwise’s chart.

Mostly, it’s Facebook. Hitwise’s mix of automated measurement and user polling found 55 percent of social network and forum traffic going to Facebook. Second-place YouTube only pulled 16 percent. Twitter leapt over Bebo and MySpace in May to land a distant third, with only 2 percent of UK social traffic.

Goad warned that “despite its popularity, Facebook doesn’t yet dominate the UK social networking market to the extent that Google dominates the search market.” Facebook gets about half of social network traffic, whereas Google attracts 90 percent of UK searches.