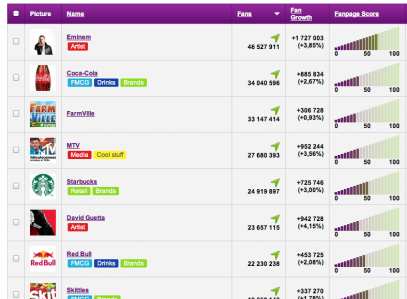 Socialbakers, a social media analytics company, announced a $2 million round today after launching a product at the DEMO conference only a few weeks ago.

The company is surrounded by competitors calling themselves “social media analysts,” with big names like Radian6, to smaller ones like ViralHeat, all playing in the same pool. But Socialbakers, whose founders launched the product wearing white chef’s hats, thinks the company has a different approach and has already been successful doing it.

“As a company we were profitable from day one, basically,” said Jan Rezab, CEO and co-founder of Socialbakers, in an interview with VentureBeat.

The profit comes from looking at social engagement instead of just keywords. Most social media analytics involves listening to social behavior: You watch a company or keyword’s stream, listen to the conversations, and determine whether they are positive or negative. From there you can tell the client whether a product is doing well, or if people have opinions about a particular service. ViralHeat even tries to predict whether a person intends to purchase a product or not, which they call “Human Intent.”

Socialbakers, on the other hand, analyzes individual products less, and focuses on online presence and social media campaign success more. The company does this by manually ranking different brands based their industry, which Socialbakers checks for accuracy and objectivity. It then looks at the brand’s social pages to make sure the pages are official and not fan-made. The software then begins the listening process and watches for engagement. In order to scale, Socialbakers crowdsources rankings from the public. The company says it gets nearly 1000 requests to help out daily.

Most importantly, Socialbakers can show you how your social media initiatives are doing stacked up next to your direct competitors. You can see if they are receiving more engagement and why. The company does this by aggregating data from around 5 million Facebook pages and places.

The company plans to put the new capital right into its product to spur growth plans and advancements. The company is also showing off some of its analyics prowess in the infographic below. Some gems from the infographic: automotive and retail industries both see the most fan-based social engagement, but airline and telecom companies are the most responsive. It also shows the United States has the most Facebook users at 155.7 million, but surprisingly Indonesia comes second at 40.4 million.

Socialbakers was founded in 2008, initially as an agency to help improve its own social media performance. The company sees 250,000 unique visitors a month, and has over 500 paying clients including L’Oréal, BMW, Vodafone, Samsung, Ogilvy, and Kraft.