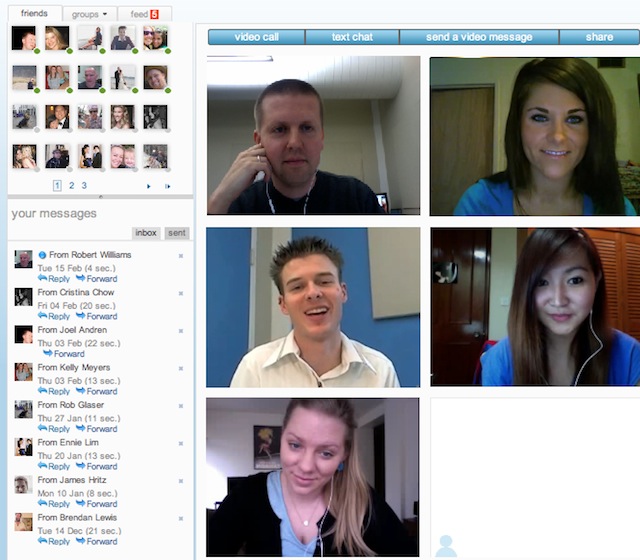 SocialEyes is one of 53 companies chosen by VentureBeat to launch at the DEMO Spring 2011 event taking place this week. These companies do pay a fee to present, but our coverage of them remains objective.

Rob Glaser already has one important video company under his belt, having founded RealNetworks in 1994 and served as its chief executive until last year. Now he’s launching another video startup, SocialEyes — and as the name suggests, it comes with a social twist.

The basic pitch is simple. SocialEyes is a site where you can find and chat with people over video, either for social or professional purposes. It taps into users’ Facebook connections and is also available as a Facebook app. Think of it as taking the Skype experience and expanding it into a fully-fledged social network, or of taking Chatroulette and adding real identity.

One of the most likely use cases, and one that Glaser and chief executive Rob Williams demonstrated for me last week, is to create a private group to collaborate remotely with your coworkers. On a single webpage, Williams opened up video windows for four of his team members.

Each video window in SocialEyes represents a one-on-one conversation, so it’s not exactly the same as being in a web meeting with your entire company. Williams could talk to all of his team members at once, or he could use the muting and instant messaging options to contact each of them when they needed to talk. So you can keep windows open with your coworkers throughout your day, then actually engage in video conversations as necessary. (I’ve heard people do something similar in Skype, but I don’t think Skype supports holding as many conversations at once.)

Williams acknowledged that video chatting probably gets a little overwhelming once you’ve got more than about eight windows open, though SocialEyes can technically support more than that

Glaser and Williams (who founded the company together — Glaser is the chairman) argued SocialEyes can also be used for more socially too. Users can see which of their Facebook friends are available on the site. And there are public and private groups built around different topics, so you can find and start chatting with someone who has similar interests.

Users are supposed to record a short video introduction describing who they are. The first time you contact someone, you watch their intro and they watch yours, so you’ll have some sense of who you’re talking to before you starting the real-time conversation.