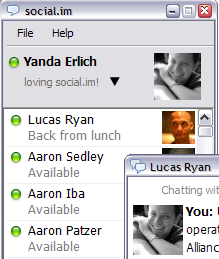 Social.im is an instant messaging service that turns your Facebook friends — and potentially friends on any social network — into IM contacts.

In other words, you don’t need to use a standard IM client such as AIM or GTalk, you can rely on your social network. First, you download Social.im software to your desktop. The software connects to Facebook’s servers, identifies your friends there and displays them in an IM-like list. You can start IM-ing with friends from Facebook once they’ve also downloaded the client.

Michael Arrington has an early look, here. We have a few more details from the company. Social.im is a new product from the team and company behind Mogad, a San Francisco web content discovery company we first covered here.

Hank Barry is an investor, as is Peter Thiel and early Googlers Aydin Senkut and Georges Harik.

Social.im shows you other information from Facebook, such as new wall posts and messages. It is only available on Windows now, and I’m on a Mac, so I haven’t had the chance to try it out. The company says the Mac version is coming soon.

Yesterday, I looked at a few other applications that were extracting data outside of Facebook and Bebo (which uses a similar developer platform) in interesting ways.

Social.im is positioned to be a nifty app. It plans to also turn Bebo contacts into Social.im contacts, once Bebo opens up its platform to more developers as planned.
Social.im will integrate with other social networks as those sites open up, and even other IM services like Meebo. It’s easy to imagine a list of friends from all the social networks you’re in, appearing within its desktop application. 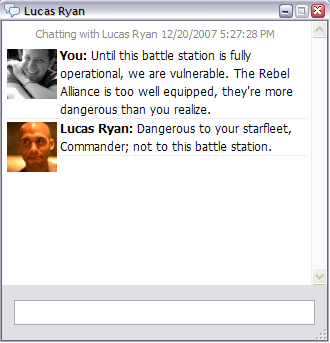