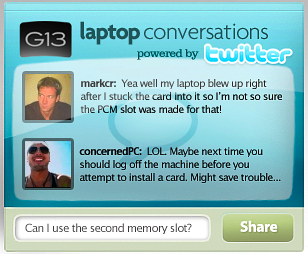 If you were to see ads for things that your friends care about, you might be more inclined to pay attention — or that’s the theory behind a new set of advertising products that SocialMedia.com is announcing today.

The ad network is using Twitter, Facebook and other social data to figure out who your friends are and when they talk about a company. Then, it’s letting the company buy ads that feature what your friends are saying. Called “People Powered Ads,” they appear as widgets and banners around the web and are complemented by a couple of other new products designed to make ads mix in better with people’s online interactions.

I expect to see many more of these types of ads in the future, in one form or another. Other ad companies, like Federated Media, have already been experimenting with a range of the same ideas — as have social networks themselves, including Facebook and MySpace.

The Twitter-powered banner ad unit, called Twitter Pulse, lets a brand filter any public tweet by users, keywords, or through manual approval, and display these tweets on other sites. The ad unit prompts users to respond with their own tweets from within it — those responses, of course, feed back into Twitter so that person’s followers can see, thereby furthering the reach of the advertiser. Dell could decide to only show Tweets from its own employees, for example, or it might choose to filter out vulgarity, says SocialMedia.com’s Nick Gonzalez. A related service, Twitter MegaPulse, lets advertisers create their own micro-sites for tweets about a company or product; another, called Twitter Sparq, lets them run these ads on their own sites. 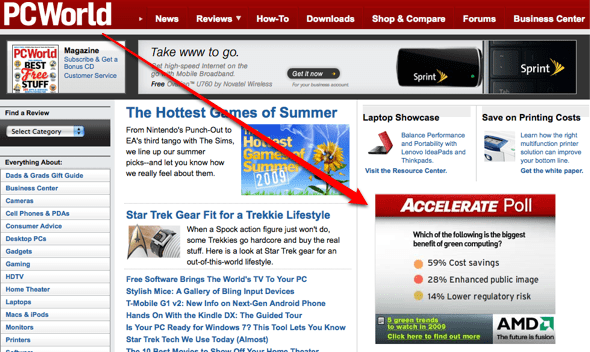 San Francisco-based SocialMedia.com also has a couple of complementary services for community-driven web sites, such as blogs. One, the “Community Stream,” is a widget that sites can embed, where users can leave comments either anonymously, using a real name, or using Facebook Connect. Also for community sites, there’s a “Community Poll” widget, where users can answer a question, then their friends can see it.

Tech publisher conglomerate IDG is partnering with SocialMedia.com to run these Twitter and community ads across its hundreds of publications around the world, in a customized version it’s calling “Amplify.” It will display reader feedback from Twitter and the community widgets across its web properties. See the ad for AMD in IDG title PC World above that just went live. The partnership could give these still-experimental ideas a big boost of traffic.

Meanwhile, SocialMedia.com — which started out as an ad network on Facebook — is still seeing the largest chunk of its business there. (Note: Chief executive Seth Goldstein told me in January that SocialMedia made more than $15 million in revenue last year, through a combination of traditional and experimental ads). And it’s not neglecting that audience. Another new product today, called Friend to Friend, is a web-wide extension of a program that it has been testing out on Facebook for months. That program used banner ads to ask people a question — Macy’s ran a campaign last December asking users what kind of Santa they were, for example (“cheap,” “jolly,” or “giving”). Then SocialMedia ran follow-up banner ads showing people’s responses to their friends on the site — so in Macy’s case, what kind of Santa their friends were. 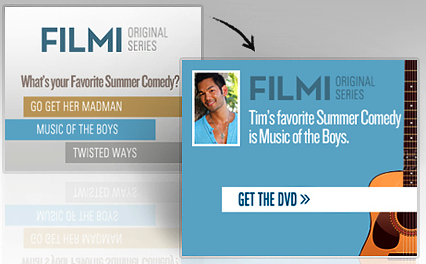 How do friend connections impact the effectiveness? In a study by Dynamic Logic on this form of advertising, Gonzalez tells me, people’s purchase intent went up 13 percent when they saw what their friends were saying versus when they were exposed to traditional advertising.

Friend to Friend uses Facebook Connect, the social network’s service for accessing information like friend relationships from anywhere on the web, so it can run these sorts of conversational banners anywhere. SocialMedia also offers a customized version of Facebook’s public profile pages, so users can go interact there. If users aren’t logged into Facebook, SocialMedia uses its own cookies and matches that information with publicly available information on friend relationships to try to target the right ad to the right person. Of course, if users don’t want to share what they think with friends, they just don’t respond to the ad.

Big picture, SocialMedia is trying to take any sort of real-person interaction happening on social web sites and channel it into easy-to-use brand advertisements. It’s an open question whether or not people will feel comfortable getting such direct messaging on other web sites. Personally, I think I’m okay with this — I’d rather see ads that are a little creepy but meaningful than ads that are not creepy but meaningless.

[Disclosure: IDG partners with VentureBeat to produce the DEMO conferences.]