Socialtext, a company that sells collaborative tools like wikis to businesses, is seriously expanding its  availability on mobile phones. But rather than building native, downloadable applications for the iPhone, the BlackBerry, and other devices, the Palo Alto, Calif. company has created a mobile website that should (hopefully) work on all smartphones.

Socialtext President and co-founder Ross Mayfield says the mobile version of Socialtext should includes almost all the features found on its downloadable application Socialtext Desktop — namely, you’ll be able to read colleagues’ Twitter-style comments and post your own comments in Socialtext Signals, follow co-workers’ activity streams, view their profiles, and also read and edit content in Socialtext’s wiki workspaces. 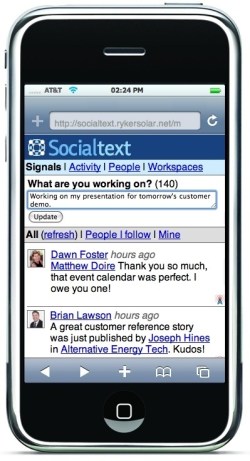 Previously, Socialtext’s mobile support was limited to Socialtext Miki, a mobile version of its wiki tools. As already happened with Miki, Mayfield says he’s particularly interested to see how the mobile apps allow Socialtext to be used in new ways, especially for businesses where you have to do a lot of work out of the office, in the field.

As for why Socialtext isn’t building an iPhone app, Mayfield says, “This is a conscious decision that we made. While iPhone apps are all the rage and are great … The kind of lightweight content that people are accessing, they don’t demand it as a rich application experience. And for every single [native] mobile application we have, if it’s going to be supported by IT, that’s a pretty long deployment process.”

The mobile version of Socialtext is still in beta testing, and Mayfield acknowledges that it hasn’t been fully tested on every smartphone yet. Companies won’t have to pay extra — it’s included as part of the standard pricing, which means that for companies with less than 50 users, it’s free.